Eagle One waiting to pounce 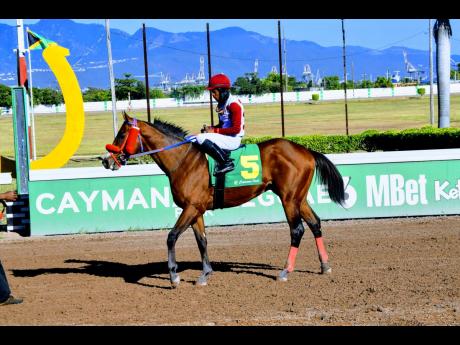 Eagle One with jockey Anthony Thomas after winning the Eileen Cliggott Memorial trophy over 6 1/2 furlongs, a three-year-old and Upwards Open Allowance Graded Stakes at Caymanas Park in February.

EAGLE ONE has landed back among overnight allowance runners after being stumped by fellow American, RACE CAR, who was also down in class for the August 20 six-furlong sprint.

Sent off a hot 3-5 favourite, EAGLE ONE was caught by sparingly raced but talented RACE CAR. Though he hadn't raced in three months, RACE CAR reported in the shape in which he had started his career in 2020, a hat-trick of wins, the third being a victory over EAGLE ONE.

Sharing topweight 126lb with RACE CAR, EAGLE ONE was clearly second-best in the line-up which included three runners with whom he will renew rivalry - DEJAE'S BOY, GENERATIONAL and three-year-old EMPEROROFTHECATS.

Heavyweight rider Philip Parchment, who had roused EAGLE ONE to a three-quarter length victory over EL PROFESSOR on January 8, has been summoned to replace Anthony Thomas, who will instead partner stablemate SUPER DUPER, a speedy four-year-old filly, whose job will be to chase speedsters such as EMPEROROFTHECATS off the lead.

At his best, EAGLE ONE is a run-on sprinter but was forced into the pace early on last to take on EMPEROROFTHECATS with no other matching speed in the event, making RACE CAR's job much easier.

Jason DaCosta has plotted a relay similar to the one he pulled off on Saturday against speedster MAHOGANY, using I AM FRED as closer after his lightweight MAKEUPARTIST disputed breakneck fractions into the straight.

With SUPER DUPER to keep EMPEROROFTHECATS honest, EAGLE ONE will be in his comfort zone as stalker with bustling Parchment waiting in the wings to pounce.