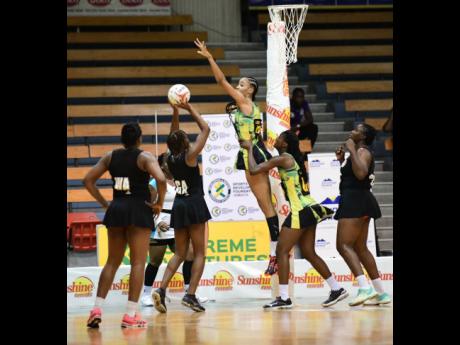 Jamaica’s Shamera Sterling (centre) is hoisted by teammate Latanya Wilson as she defends against a shot by Trinidad and Tobago’s Kalifa McCollin during a Sunshine Series Test match at the National Indoor Sports Centre in Kingston on Tuesday, October 19, 2021.

With the Sunshine Girls starting their Commonwealth Games campaign on Friday, vice-captain Shamera Sterling says this is an opportunity to win a major tournament that should not be wasted.

The Sunshine Girls, who took bronze at the 2018 tournament in Gold Coast, Australia, have assembled a 12-member squad for this year's tournament. However, they finished fifth at the 2019 Netball World Cup in Liverpool, England.

"Right now, for me, I think it is now or never because if we don't make it to the grand final of the Commonwealth Games, then I don't know when it will be," Sterling said. "I am pretty excited and we are looking forward to it and I know that my team can do it only if we stay consistent throughout the tour."

Sterling says that the team has done well in their preparations heading into the tournament and confidence is high.

"We have a group of players that are very talented individually, and I feel that a lot of work has been put into getting us to play how we play with each other, so I am really confident in the preparations that we have done leading up to this Commonwealth Games," she said. "I think we just have to play disciplined netball, sometimes structured netball, and we just have to be very consistent and know that any team we come up against, we will be able to beat them."

Jamaica face Wales in their tournament opener on Friday at 6 a.m. Jamaica time.