No foreseeable issues for Classical Orb on Sunday 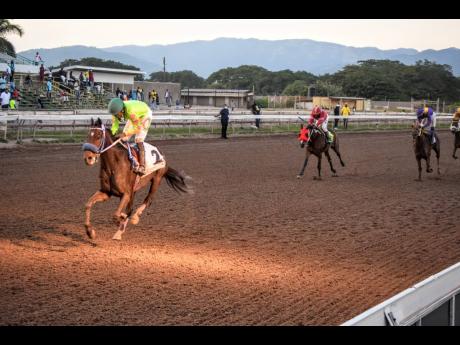 NEVER worse than third in seven starts since debuting last November, United States-bred CLASSICAL ORB should reward his new connections with a win at seven and a half furlongs in Sunday's seventh event, tackling leading trainer Jason DaCosta's tag team of SIR JOHN and IT'S A BOY.

CLASSICAL ORB had both DaCosta runners behind when finishing second to PRINCE MARSHALL at nine furlongs, reporting off a three-month break out of his new barn on June 18.

A winner out the mile chute in his previous race, beating CRUELLA on March 5, CLASSICAL ORB stayed on strongly behind runaway winner PRINCE MARSHALL to hold T BRADY at bay for second. IT'S A BOY finished fourth, a length behind CLASSICAL ORB.

PRINCE MARSHALL was in a mean mood that afternoon, winning by six and a quarter lengths. Third-place T BRADY returned eight days later to clock 1:18.4 at six and a half furlongs, beating IT'S A BOY by five and a half lengths.

Though CLASSICAL ORB was only a length ahead of IT'S A BOY at the finish when both were beaten by PRINCE MARSHALL, that was the closest DaCosta's runner got to Colin Blair's charge for the entire nine furlongs, outsped by the importee from start to finish.

Though not the quickest down the backstretch, CLASSICAL ORB still has better pace than IT'S A BOY, who will have to rely on his faster stablemate, SIR JOHN, to frame the race for him as a closer. SIR JOHN has been showing speed since fitted with the figure eight on May 21, the day he ran the headline for IT'S A BOY to close at a mile, completing a stable exacta.

SIR JOHN made all in his following race to win at seven furlongs. However, when both DaCosta runners returned up in class among non-winners-of-four, two weeks later, neither could stop an off-the-break CLASSICAL ORB from chasing home PRINCE MARSHALL.

Richard Azan's DADDY JONES has trained really well for the race, galloping seven furlongs in 1:28.2, last Sunday morning, alongside PERFECT BREW. However, the track was a bit fast on Sunday due to overnight rain, plus PERFECT BREW has proven himself a short runner, which isn't saying much for DADDY JONES being unable to pull away from the three-year-old in a seven-furlong work.

Blair, who hasn't won a race in ages, has his best chance ever to find his way back to the winners' enclosure. He has fitted CLASSICAL ORB with cheek pieces, which should keep the American focused and sharper for the shorter trip.