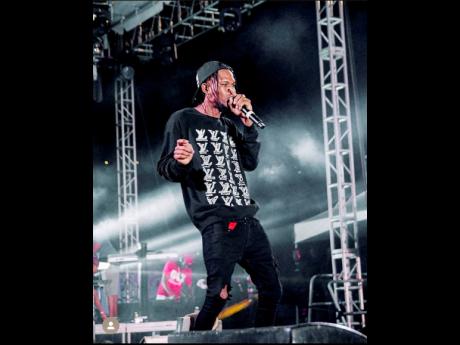 Chiney K in his element at New Rules.

Disc jock Chiney K is in high spirits following his performance at the recent New Rules event at the National Stadium car park.

Not to be overshadowed by the artistes who performed, the DJ, whose given name is Nathaniel Andre Scully, held his own and kept the audience entertained with juggling selections.

"The feedback that I received from New Rules has been nothing short of amazing. It's such a great feeling to have everyone show me love," he said. Chiney K explained that he is motivated to build on that reception and expand his talent and brand.

"I would like to travel and get the chance to show the world my talent. I want to show others that as long as you put in the effort, time and dedication, you can make it," he said. Chiney K said that he has had a passion for music since high school.

"I had a friend who owned his own sound called Side Effects, and I took advantage of every opportunity to go around the sound and imitate Tony Mattheron and Fire Links. One day my friend told me that I could make a profession out of selecting, since I had both the sound and vibes. I didn't take it too seriously at first, but after being on the road a few times, I decided to take it seriously and become a full-time DJ," he revealed. Chiney K is also busy promoting new music.

"My latest project consists of me working on a rhythm for myself. In addition to that, I am also promoting two songs, one by the name of Designa by Paco General and the next one is Shawtz & Bad Sockz by Kemar Highcon. So definitely keep an eye out for those," he said.