No idleness for Silent Mission 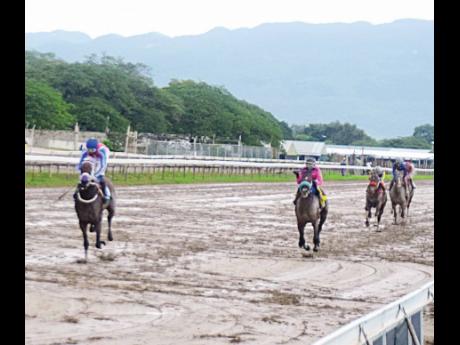 Silent Mission had absolutely no luck in running on last, over-confidently ridden and herded wide after a spill on the home turn, eventually finishing a storming fourth, beaten a half-length in a driving finish won by GREAT TRICK ahead of GET A PEPSI and LAST BID.

Returning at 114lb at the exact six furlongs with Omar Walker, Jason DaCosta's choice of rider clearly suggests he has asked for urgency leaving the half-mile marker, not Anthony Thomas' wait-all-day style, which ran him into trouble after MILA'S ALL THAT went down against the rail and BABYLIKE's rider reacted by almost hauling up, forcing next-to-last SILENT MISSION widest off the turn.

SILENT MISSION's storming stretch run proved the Portmore Stakes and 1000 Guineas third-place filly would have won the six-furlong sprint. With only three horses marginally behind her a furlong and a half out, SILENT MISSION motored from eighth to force a four-way photo at the finish.

Not only was SILENT MISSION too far off the pace down the backstretch, almost next-to-last, but when roused by Thomas inside the final furlong, she drifted to heavier ground inside, under right-hand whipping, whereas GREAT TRICK, GET A PEPSI and LAST BID were enjoying the lighter going in mid-track.

DaCosta summoning Walker isn't by chance, the six-time champion jockey was aboard SILENT MISSION in the Portmore Stakes and 1000 Guineas, races in which she came off the home turn third and second, respectively, behind subsequent derby winner ATOMICA.

Champion trainer Anthony Nunes, who appears to be making a late charge at stakes leader DaCosta, posting a late hat-trick of upsetters to close last Sunday's card, has a two-pronged attack in the 12-horse field, WOWTASTIC and MINIDEWAK.

WOWTASTIC was part of a quartet on the lead, disputing with MILA'S ALL THAT, LAST BID and GREAT TRICK. Unaffected by MILA'S ALL THAT fall, WOWTASTIC weakened close to home, finished fifth, a length and a half behind storming SILENT MISSION.

Returning a week later at five furlongs round, WOWTASTIC tried to make all but was caught by LA CRIMAE, who was slowly into stride. MINIDEWAK was the first to challenge her stablemate, getting within a head a furlong out, before LA CRIMAE pounced to outclass both.

Nunes' runners are quicker than SILENT MISSION but six furlongs should be enough ground for her to catch them plus Omar Walker won't be caught idling down the backstretch.