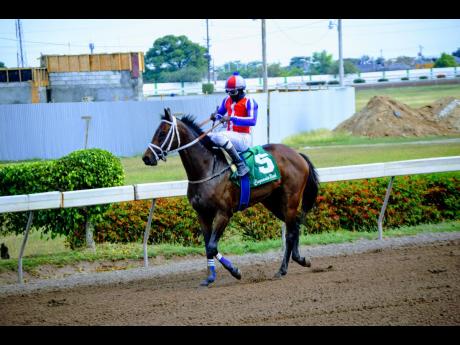 CALCULUS with jockey Shane Ellis wins the Alexander Hamilton Trophy over a mile for three-year-old and upwards Open Allowance Stakes at Caymanas Park in January.

CALCULUS will be a no-brainer banker on every ticket punched Sunday, scandalously down two groups among overnight-allowance runners after failing by a half-length to catch KING ARTHUR in the Grade One Eros Trophy six weeks ago, allowing the 2020 Derby winner 11lb.

Bank CALCULUS in the Kenneth Mattis Memorial at nine furlongs and 25 yards, but resist the temptation of Anthony Nunes' NEFERTARI in the ninth event at six and a half for local-bred non-winners of two races and imported maidens.

On paper, especially her glowing 1:08.0 for five and a half furlongs, the last five in 1:01.0, clocked last Sunday morning, NEFERTARI appears a second 'free horse' on the Twilight 6. Sunday, however, won't be the first occasion on which NEFERTARI, named after Rameses' first wife, could use flattery to deceive.

Bred Savoy Stamp-Princess Geeta, making her a half-sister to Fayrouz - who won the 2018 Oaks for Nunes and did well among the boys, placing second in the St Leger and third in the derby - NEFERTARI stormed home from a seemingly hopeless position to win at six and a half furlongs on her March 12 debut.

Backed down to 7-5 next time out among non-winners-of-two, she paid the price for her antics at the gate, hardly improving from last at a mile. Fitted with a visor for the fillies-only Portmore Stakes in May, NEFERTARI ran fairly well behind ATOMICA to place fourth in a bang-up finish for the minors with runner-up OUR ANGEL and third-place SILENT MISSION.

A month later, however, in the 1,000 Guineas, NEFERTARI, visor replaced by blinkers, roguish NEFERTARI pulled up her handbrake to plod home last of eight runners.

Returning barefaced on Sunday at 112lb with Anthony Thomas, NEFERTARI is bound to tilt the tote. She, however, hasn't raced in three months and can't afford to spot the field too many lengths at the start with race-fit colts and geldings in the line-up such as her stablemate EL CID and GET A PEPSI, who failed by a neck to tag GREAT TRICK at six furlongs last out.

GREAT TRICK returned to lead BRINKS and company to the half-mile in last Saturday's Winston 'Fanna' Griffiths Classic at nine and a half furlongs, eventually finishing a respectable fifth.

Other runners to consider as possible spoilers against NEFERTARI includes recent winner ONE LIKE IT, who appeared to be begging for a longer trip when getting off the mark at five furlongs round. DESHA is also a useful filly, who didn't want to be rushed off her legs when fitted with blinkers against PRETTY GIRL and company at five and a half.

If NEFERTARI doesn't come good, the race could be turned on its head at a good price.