Mahogany the one to beat 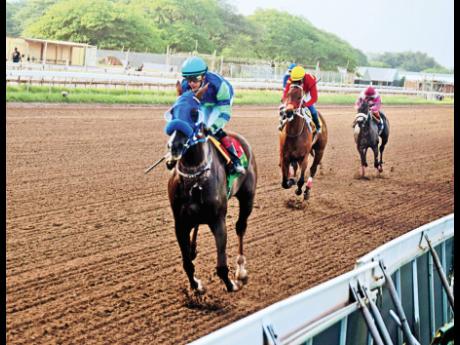 WERE a line to be run through MAHOGANY's loss to RUNAWAY ALGO, reporting lightly trained off a seven-month break in mid-April, it would be reasonable to say the five-year-old gelding's last true defeat was December 2020 when finishing fourth in the Ian levy Cup to NIPSTER, SENTIENT and TOONA CILIATA.

Prior to that loss, MAHOGANY had clocked an Eros-like 1:16.1 for six and a half furlongs, blasting NIPSTER and SENTIENT off the racetrack, before attempting the extra two furlongs of the Ian Levy, which, bar the RUNAWAY ALGO hiccup, makes him a winner of seven of his last nine starts.

Facing a line-up of runners, most of whom his stablemate, JORDON REIGN's, recently annihilated in a four-race win streak, MAHOGANY represents an even more fearsome foe. No horse in training has come close to the times or ease of victory MAHOGANY has displayed in three consecutive wins.

Trying to make a race of Saturday's None Such Sprint at six furlongs, the racing office has assigned the event an open allowance/graded stakes hybrid in which MAHOGANY and KING ARTHUR are the only stakes-rated runners based, of course, on types of races won and when (conditions).

MAHOGANY's victory in two similar events puts him at the top of the scale, 126lb, whereas KING ARTHUR, who has won two stakes races since May, comes in at 110lb, only because Anthony Thomas cannot make 101lb, the handicap weight allotted by the racing office to 'compensate' for Jason DaCosta opting to run the 2021 Jamaica Derby winner in a sprint.

Therefore, all the runners hoping to lower MAHOGANY's colours have ironically met their Waterloo at the scale because none of their riders can make 101lb, MAKEUPARTIST aside, effectively killing the theory of the open allowance horses coming in 'under the weight' to make a race of the None Such.

Despite carrying approximately 98lb, MAKEUPARTIST, who had to be ridden flat out by Anthony Thomas a month ago to get the better of CAPTUREMYSHIP in an overnight allowance at five furlongs straight, has been flung into a lion's den against the likes of MAHOGANY and GOD OF LOVE.

Drawn against the rail works perfectly for MAHOGANY with at least three of his neighbours - KING ARTHUR, I AM FRED and DUKE - being slower starters. MAKEUPARTIST, LURE OF LUCY, GOD OF LOVE and GO DEH GIRL will all have to be rounding slower rivals to catch MAHOGANY's coattails.

Title-chasing Dane Dawkins is back aboard MAHOGANY, who clocked 1:12.3 for six furlongs alongside stablemate SHE'S A WONDER on Sunday.