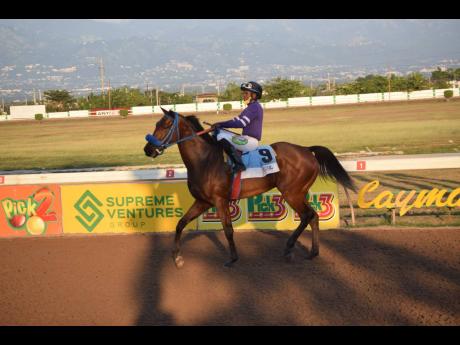 THOUGH he failed to win a classic race, BRINKS regained form in time to claim runner-up spots in the 2000 Guineas and Jamaica Derby, plus a third-place run in the St Leger, to put his miserable early season performances behind him, again showing signs of the runner who promised much as a two-year-old.

Tackling nine-and-a-half furlongs in Saturday's Winston 'Fanna' Griffiths Classic, BRINKS has the good fortune of conditions on his side - classic winners ruled out - meaning no derby-winner ATOMICA nor 2000 Guineas and St Leger winner, BLUE VINYL, being around to flop his show.

Sharing topweight 126lb with PERFECT BREW takes care of BRINKS' old rival, who, though on a hat-trick, barely managed to outrun sprinter and stablemate, POWER RANKING, at seven and a half furlongs on last while carrying 117lb.

Stepping up to challenge in-form BRINKS at level weight puts PERFECT BREW in a pickle similar to the 2000 Guineas when he was outclassed by BLUE VINYL and runner-up BRINKS, finishing a distant seventh. Though he has shown improvement since fitted with the figure eight and tongue tie in four subsequent races, PERFECT BREW has not crossed paths with classic company until now.

With the remainder of the line-up reading like a classic-season third 11, BRINKS, who has worked extremely well, six furlongs in 1:14.4, should use his pace to run rivals into the ground. Trainer Ian Parsard must have gone easy with BRINKS in that workout. Prepping for the derby, BRINKS had clocked 1:12.2 the previous Sunday.

BRINKS keeping pace with ATOMICA and BLUE VINYL in the derby was no easy feat, straightening two and a half lengths third, before staying on to grab the runner-up spot. Whoever tries to go with BRINKS, possibly UNRULY DUDE, won't last to tell the tale.

Gary Subratie's D HEAD CORNERSTONE, a distant fourth in the derby, returned 15 days later to run past UNRULY DUDE at a mile, clocking 1:40.3, suggesting he is rapidly improving and could upstage the likes of PERFECT BREW and MORIMOTO as runner-up.