Go with The Good Witch 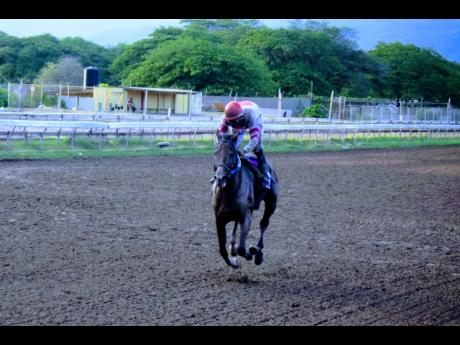 POSITIVE ID ridden by Reyan Lewis strolls to an easy victory in the Restricted Allowance race over nine furlongs and 20 yards at Caymanas Park last Sunday.

RACING among horses who have never won an overnight allowance, United States-bred THE GOOD WITCH is technically down in class for Sunday's ninth event at seven furlongs, beaten three times in July by runners now campaigning in open allowance/graded stakes.

Reporting with a resume of 2-2-3, beaten by SHE'S A WONDER, SHE'S MY DESTINY and third behind LURE OF LUCY last month, it's hard to oppose THE GOOD WITCH, a four-year-old claiming winner at Woodbine, Canada, in September, hunting her first victory locally.

Adin Williams has added a tongue tie for what should be THE GOOD WITCH's easiest assignment on her sixth local start, retaining Dick Cardenas who has been aboard since she finished down the track, debuting May 21 behind GOD OF LOVE at five furlongs round.

MINIATURE MAN and ARTESIA aside, none of THE GOOD WITCH's rivals have managed to make an impact in overnight allowance, hence qualifying for the event which bars winners at the level. However, THE GOOD WITCH, being a winner overseas, has had to be cutting her teeth among both restricted and overnight-allowance winners whenever the occasions arise.

Since returning from a 10-month lay-up in May, the same event in which THE GOOD WITCH made her local debut, MINIATURE MAN has not been the horse that closed a hat-trick of wins with victory in last year's 2000 Guineas.

Being a classic winner, he reported off the lay-up in an overnight allowance after finishing down the track in the St Leger the previous July. Outsped in two sprints on return, MINIATURE MAN was expected to come good at a mile in June, considering his two pipe-openers. He, however, finished third behind MONEY MONSTER and AWESOME TREASURE. Given two other chances, he was outclassed by EROY and BIG JULE, first at seven and a half then nine furlongs and 25 yards.

Reporting at topweight 126lb, MINIATURE MAN would have preferred at least an extra half-furlong to test THE GOOD WITCH, considering he is nowhere close to his three-year-old form.

The filly ARTESIA is a stalking sprinter, who is sitting too close in the handicaps to THE GOOD WITCH, 121-118lb, to beat the foreigner at middle-distance.