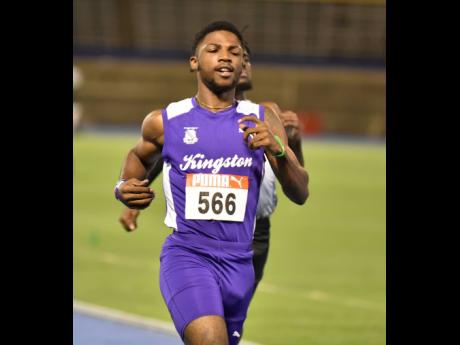 Nkrumie told STAR Sports on Monday that after consulting with his family, he has decided that the best thing was to complete his school career.

"I am going back to school to finish school. I think it is the perfect decision. Maybe some people are going to say 'why him never go professional', but it is not what people think and when I analyse the whole thing, I just made my decision because I am not in no rush," he said.

"I got professional (offers), local colleges and all of that," Nkrumie added.

Nkrumie, who is the fastest Jamaican junior this year with a time of 10.02 seconds, which is the national junior record, won a silver medal at this month's World Under-20 Championships in Cali, Colombia.

He underscored that he is currently the holder of nine Caribbean Examination Council (CXC) subjects and according to him he is in no rush to enter the professional stage because he still has a lot of time to do so.

"Remember that I am still young because I am 18 years old and so this is the right decision. The next thing I rush it and something happens so I am going to finish school and get my education and get some more subjects including some CAPE," he said.

Nkrumie's time of 10.02 seconds makes him the second fastest junior in the world this year, behind Botswana's Letsile Tebogo, who defeated him, to win the gold medal in Cali, Colombia earlier this month.

Nkrumie, who was a second place finisher in the boys' Class One 100 metres final at this year's ISSA/GraceKennedy Boys' Championships, helped to guide KC to the title.