Real Boss on a platter 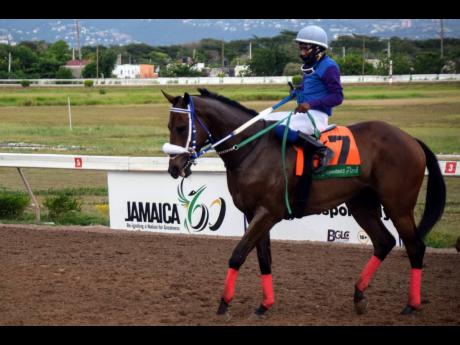 SPENCER Chung's imported maiden, REAL BOSS, had her petticoat exposed on last, a flying second to PERFECT BREW at seven furlongs after being broadsided shortly after the start and all but tailed off down the backstretch.

Fitted with blinkers for her third start, clocking 1:16.0 for six furlongs at exercise in the headgear, followed by a half-mile in 50.0, REAL BOSS would have landed the gamble had she not been crossed at the off by AWESOME PRINCE.

Dick Cardenas, who rides with his guard up, immediately shifted the filly wide of the 10 runners ahead of him, whereas Anthony Thomas aboard PERFECT BREW hustled his mount to tuck in behind a curtain of horses chasing UNRULY DUDE and EL CID into the lane.

Forced six to seven wide off the home turn because of his insistence to avoid tight quarters off the turn, Cardenas gave REAL BOSS too much to do, while PERFECT BREW emerged third out of the pack, going by EL CID a furlong out before aiming for a tiring UNRULY DUDE.

PERFECT BREW overhauled UNRULY DUDE a half-furlong out with enough left in the tank to hold off REAL BOSS' challenge, Cardenas conceding close home that the gelding had slipped from his grasp, but was well clear of UNRULY DUDE and EL CID, who finished third and fourth, respectively.

EL CID actually turned out to be a shocker for UNRULY DUDE, whose game plan was to go gate-to-wire. However, Tevin Foster had other plans astride EL CID, keeping UNRULY DUDE honest and busy from the start, softening the speedster for the closers. Both return with the trip extended and no PERFECT BREW around, which should hand the race on a platter to REAL BOSS, especially if they decide to go kamikaze on the lead again.

UNRULY DUDE returning with visor fitted suggests catch-me-if-you-can tactics, which will again attract the attention of EL CID as well as D HEAD CORNERSTONE and PRINCE SANJAY, a major plus in REAL BOSS' favour.

Chung has called up Reyan Lewis to replace Cardenas who is out for the weekend, a decent choice of rider, guaranteeing a strong finish and no qualms about getting caught in traffic along the rail.