No real threat for Mahogany in BGLC Trophy 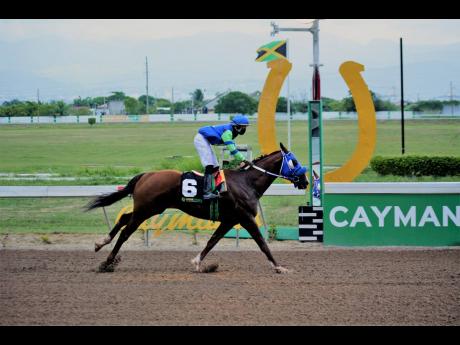 Mahogany, with Dane Dawkins aboard.

AFTER flirting with a third track record on his last outing, posting 1:30.2 to get within a second of Sky Train's 1983 mark of 1:29.2, MAHOGANY returns at five and a half furlongs in Monday's Betting, Gaming and Lotteries Commission (BGLC) Trophy with only the clock to beat.

Unbeaten in two outings since getting six months' worth of cobwebs out his system in a fast-time loss to speedy foreigner RUNAWAY ALGO on April 18, MAHOGANY should have no problem brushing aside his six rivals, should so many remain standing at post time, considering stablemate SHE'S A WONDER is down to compete in Saturday's overnight allowance at seven and a half furlongs.

Having already felt MAHOGANY's wrath at six furlongs in May, a nine and a quarter-length win in 1:11.1, GOD OF LOVE, the next accomplished sprinter in the line-up, would do well to secure second-money with a measured performance instead of embarking on a kamikaze mission for the lead.

Dick Cardenas replaces Dane Dawkins aboard MAHOGANY after the leading rider missed a date with the stewards and was handed a two-day suspension, returning this Saturday's Independence Day to partner ATOMICA in the Jamaica Derby.

Parsard and Cardenas should also team up to land the day's secondary feature with BERNING RED, thrown in among $750,000 claimers, for the Emancipation Day Trophy at six and a half furlongs.

Running on a $1 million claim tag on July 17, BATON ROUGE made all with Philip Parchment to repel ONE DON and AZARIA at six furlongs. Parchment will again set off in front with BATON ROUGE but won't be able to slip BERNING RED, who beat top three-year-old EMPEROROFTHECATS at seven furlongs on June 19, afterwards returning to run a decent race in the St Leger.

Though the form lines show BERNING RED in eighth place, eight lengths behind BLUE VINYL and ATOMICA two furlongs out in the St Leger, the Bern Identity-Feasibility Study gelding left the half-mile marker fourth, racing as a team with EMPEROROFTHECATS to the two-and-a-half point, before being eased by Omar Walker when the big guns quickened.

Cardenas, who hates close quarters along the rail, gets a good draw to stalk with BERN NOTICE, mid-track at post nine in the 16-horse field, whereas Parchment will have speed to contend with - SPECIAL COUNSEL and RAW LIQUID - in his bid to steal another march.