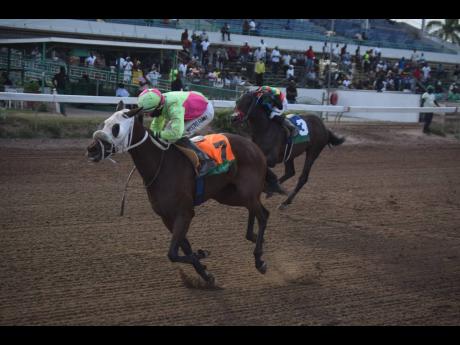 Title-chasing rider Dane Dawkins lit up yesterday's nine-race card with a four-timer including an upset 7-1 victory aboard Richard Azan's PELICULA in the Terremoto Trophy feature event at 10 furlongs for three year olds, restricted to imported maidens and non-winners of two races.

Dawkins' four-timer pushed him to 55 winners, three clear of reigning three-time champion Anthony Thomas after starting the afternoon trailing by one win in hunt of his first title.

All but one of Dawkins' winners, OKAHUMPA, who went off at skinny odds of 2-5 in the opening event, were value for money. JAXSON was his second winner at odds of 5-1 in the fifth, followed by the late double, PELICULA and 5-2 chance HOT ICE.

Returning fitted with blinkers for the route race, after finishing fifth with Dawkins at seven furlongs behind OUR ANGEL on July 2, PELICULA cruised down easily to chase stablemate RAINSVILLE, who had taken over from RORAIMA at the half-mile marker.

Travelling effortlessly, PELICULA collared and took over from RAINSVILLE a furlong and a half out, finishing two lengths clear of United States-bred LION OF EKATI, who tried to launch a last-furlong attack but was safely held by the winner, who covered the trip in 2:13.2.

Gary Subratie's D HEAD CORNERSTONE, who had returned rather quickly to the races after placing fourth in the 10-furlong Jamaica St Leger two Saturdays ago, ran a flat race, ridden to keep pace from three furlongs out, before weakening in the stretch run as the 3-5 favourite.

Champion trainer Anthony Nunes saddled two winners, teaming up with Tevin Foster in both instances, 1-9 favourite NOBLE IMPULSE in the second event and EL CID at 2-1 in the fourth.

Leading trainer Jason DaCosta struck with a rare outsider, the day's biggest, down-in-class BATON ROUGE, lowering his sights to take on $1 million claimers at six furlongs in the sixth.

Despite being forecast at morning-line odds of 7-2 by the Track and Pools and selected as the publication's first choice, BATON ROUGE won at a whopping 21-1, going all the way with Philip Parchment, who had to dig deep in a driving finish to beat United States-bred ONE DON by three-quarter length in 1:14.0

Racing continues at the weekend with a Saturday meet.