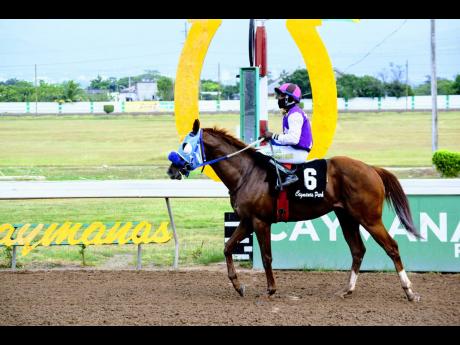 Nomoredeals, with Dane Dawkins aboard.

NOMOREDEALS finished second in three of his last five races. Though he finished sixth and 10th, respectively, in the Kingston Cup and 2000 Guineas, he ran creditably in both races won by BLUE VINYL, who impressively snapped ATOMICA's win streak in last Saturday's 2000 St Leger.

Tackling 13 rivals in Saturday's Knutsford Park Cup at six furlongs, NOMOREDEALS gets an ideal trip, Dick Cardenas replacing Paul Francis, plus visor refitted, all of which should get the job done from a traffic-free stall 14.

Asked to sprint five furlongs straight two Saturdays ago, NOMOREDEALS ran a brave race but failed by a short head on a wet-but-fast track, going down in 58.3 with a weird change of equipment.

For reasons best known to himself, trainer Gresford Smith ran NOMOREDEALS barefaced, the first in 12 starts, removing the visor in which the colt had failed by a short head to catch imported LUKSOL at six furlongs on April 23, beating BLUE VINYL into third. NOMOREDEALS also sported the visor when outstayed by MORIMOTO at seven furlongs a month later, finishing clear of third-place GILBERT.

With visor refitted and breaking widest, NOMOREDEALS, who allowed SUNSET SILHOUTTE 13lb when beating maidens in January, should use the form he has been showing against classic runners to topple non-winners-of-two company.

Sitting level at 115lb with the first three past the post in the Kingston - BLUE VINYL, PERFECT BREW and SUPREME SONG - NOMOREDEALS actually turned for home second and was fourth a furlong out, battling for the minors after BLUE VINYL ran through.

Similarly, NOMOREDEALS ran a decent race in the 2000 Guineas after chasing home MORIMOTO. He was sixth by three and a half lengths at the half-mile marker and only gave up a length and a half to the leaders two furlongs out, straightening seventh by five lengths off BRINKS, who returned to give ATOMICA hell in the St Leger, proving that that run was no fluke.

Cardenas gets his ideal ride, wide of trouble aboard a stalker, with speedsters such as A GIFT FROM BEN, BUZZ CITY LIGHT, SUGAR DADDY, BUBUGATTI, MAGGIE'S BOY, KP CHOICE, and JOSH all running on short fuses, which should extinguish inside the final furlong.