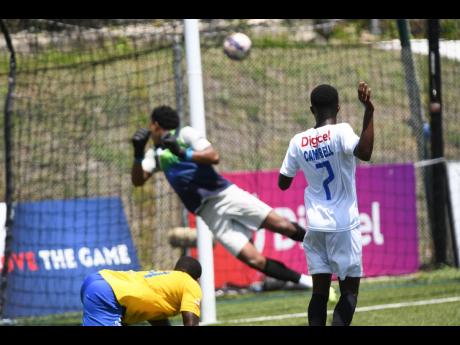 His progression has been week by week but Mount Pleasant teenage midfielder Devonte Campbell says he is relishing being entrusted as a starter in the Jamaica Premier League (JPL) play-offs.

The 17-year-old Campbell opened the scoring for the St Ann-based club en route to their 3-1 quarter-final first-leg win over Harbour View on Saturday at the UWI-JFF Captain Horace Burrell Centre of Excellence.

Campbell sprinted down the left side of the field and was put through on goal by Kevaughn Isaacs. He then dribbled into the box before sending a powerful left foot past the goalkeeper. He was a menace to the Harbour View team throughout the 90 minutes as Mount Pleasant took a two-goal advantage going into tomorrow's second leg. The young forward has made nine appearances so far in this short season, including Saturday's play-off game, and he says that he is glad that he is being given the confidence to help in his club's title charge.

"It feels good to be just 17 and starting in a Premier League team as big as Mount Pleasant and with all the talent that we have at the club. So it's a very good feeling," Campbell, a former Anchovy Primary student, said. He was promoted to the senior team from the Mount Pleasant Academy this season and Saturday's goal made him the first player from the academy to score for the club in the JPL.

It's a confidence and trust that interim head coach Walter Downes says that he has seen in him since the start of the season. While they have needed the time to get him acclimated to the first team, Downes says that from the beginning, he knew the type of player he was getting.

"I knew when we got him at the start of the season that he was a prospect. He has progressed every day, with training with the first team and the coaches that we have and initially we dipped him in with 20 minutes to go and half an hour to go when the game was stretched so he could use his pace and his trickery," Downes said. "But the last couple of games he's been ready to go when we needed a little bit of a spark up front and he has definitely given us that."

Whether he gets the nod to start again for the return leg Downes said that they would have to assess the team before making any decisions. However, Campbell says that the club is in a great position to move to the semi-finals and should allow them to play with more freedom in the second leg.

"It really feels good knowing that we have a two-goal advantage. It will make us feel more comfortable and more relaxed in the second leg," Campbell said.