I Am Di One odds on for Jamaica Oaks 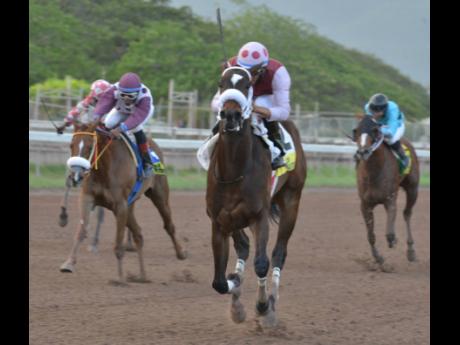 I AM DI ONE easily beat LADY BLUE at her own game in last month's 1000 Guineas, going gate to wire at a mile in only her second start. She has beaten nine of her 10 rivals, mainly in the Guineas, and now gets 10 furlongs, which makes her unbeatable in the Jamaica Oaks.

A massive filly, I AM DI ONE has everything going for her and will be the shortest-priced Oaks favourite in years, racing only the clock. What is more interesting is whether PRINCESS AVA, who was used up and finished seventh , trying to keep pace in the Guineas, can rebound to close the exacta for leading trainer Anthony Nunes.

Champion trainer Wayne DaCosta's LADY BLUE proved herself a real little battler in the Guineas but was no match for her giant foe, who had her chasing another horse for the first time in seven starts. Sired by sprint stallion, Blue Pepsi Lodge, LADY BLUE still managed to stay on for second after chasing splits of 22.4, 45.1 and 1:10.0, which understandably resulted in a final time of 1:40.4.

Gary Subratie's CASUAL DRINK and Nunes' ENVISAGED finished fourth and fifth, respectively, neither playing any part in the early fractions, which afforded their overly flattering strong finishes, ahead of PRINCESS LAUREN and PRINCESS AVA, who were third and fourth from the off to the last furlong.

Considering I AM DI ONE made all to beat LADY BLUE at a mile, there is absolutely no reason to change the race plan, which would leave DaCosta's Guineas runner-up at the risk of being overhauled going two furlongs longer.

However, she has a big heart and could very well secure the $540,000 second money for DaCosta, if ridden specifically to beat the others, because I AM DI ONE would have to fall to lose the $1.62 million winners' purse.