Master of Hall too good over nine furlongs 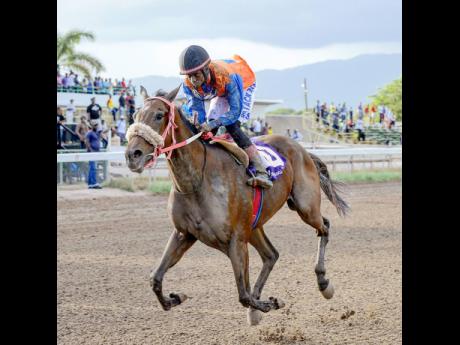 Oneal Scott, aboard MASTER OF HALL, wins the eighth race at Caymanas Park on Saturday, September 1, 2018.

MASTER OF HALL proved on 2000 Guineas Day that his fast-finishing, second-place finish behind three-year-old RUN THATCHER RUN, two weeks earlier, was an unlucky loss, denying him what would have been a fourth-straight victory from seven starts.

On Guineas Day, MASTER OF HALL not only notched his fifth win but equalled WILL IN CHARGE's Diamond Mile time, 1:37.0, the fastest at the trip since SHE'S A MANEATER's victory in the same race a year prior.

To say MASTER OF HALL has arrived would be an understatement. The four-year-old gelding debuted May 23 last year, after the Guineas, and three days before the Governor's Cup, with hopes of making the Jamaica Derby.

He returned to the races on June 9, three weeks before the Derby, but lost by a length to ROYAL AVIATOR, and was not seen again until August, well after the classic season had ended, again losing after a bad break, which ring rust never allowed him to overcome, finishing fifth behind GIFT OF LAW as a 1-2 favourite.

After that loss, MASTER OF HALL went on a three-race win streak, over a period of six months, before being hindered when making his move at the half-mile on March 30, recovering to charge at RUN THATCHER RUN in the last furlong, losing by only a head in a decent 1:32.2.

Trainer Fitzroy Glispie kept faith with claiming apprentice Reyan Lewis and was rewarded with his scintillating mile run on Guineas Day, carrying 114lb, four more than he will tote in Saturday's Bonnie Blue Flag Trophy, an open allowance, a level up from his last victory.

At 110lb, sharing bottom weight with stablemate PAKMAN, a no-hoper whose only role is to ensure the race meets the so-called six-starter criterion, MASTER OF HALL's running style and finishing speed are tailor-made for nine furlongs and 25 yards.