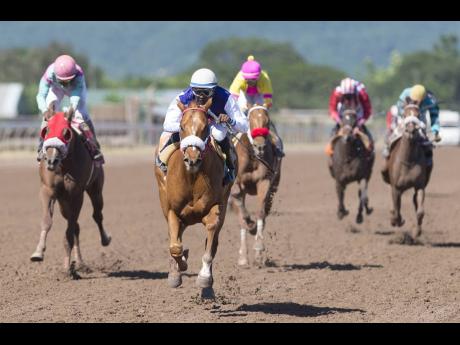 Run Thatcher Run, with Omar Walker aboard, wins the seventh race over a distance of 1100 metres at Caymanas Park in, St Catherine on Saturday, December 1, 2018.

SUNDAY's 2000 Guineas has the real makings of a classic, talented three-year-olds with crack riders on whose split-second decisions the race will be determined, overriding all prior conversations in the parade ring.

With the exception of TOONA CILIATA's Robert Halledeen, who is as good as any, on any given day, the other fancied runners all have jockeys with international experience - unbeaten RUN THATCHER RUN (Omar Walker), EARN YOUR STRIPES (Simon Husband), speedy FATHER PATRICK (Trevor Simpson), forever-staying SUPREME SOUL (Shane Ellis), and sneaky SENTIENT (Dane Nelson).

Hardly any of the riders can complain of a bad draw, not even SUPREME SOUL, who is widest at stall 14, which will suit his running style, staying out of traffic while giving Ellis an important bird's-eye view of rivals down the backstretch.

Walker should be equally comfortable against the rail with RUN THATCHER RUN, again alongside EARN YOUR STRIPES, a flashback to the Jamaica Two-Year-Old Stakes when they were at post-positions two and three, respectively.

FATHER PATRICK and TOONA CILIATA, the horses who battled out the Prince Consort Stakes, are also alongside each other, smack in mid-pack, with four furlongs to run before the half-mile marker intervenes.

TOONA CILIATA might have overpowered bred-to-sprint FATHER PATRICK at seven furlongs in the Prince Consort, winning by a length and a half, trainer Ian Parsard has publicly stated, and the evidence is there at exercise, that the most serious training the speedster has had to date was saved for his Guineas run.

FATHER PATRICK's mile in 1:41.4, clocked Sunday morning, should not be taken lightly, certainly not with Simpson's track record of stealing big races from in front. TOONA CILIATA could be the most improved of Anthony Nunes' quartet since fitted with a visor, first getting within three-quarter length of FATHER PATRICK at six furlongs before rallying along the rail to beat him at seven in the Prince Consort.

The jury is out on EARN YOUR STRIPES, who shares Nuclear Wayne as a speed sire with FATHER PATRICK, and was unable to catch Parsard's speedster, and TOONA CILIATA, flattening out for third in the seven-furlong Prince Consort.

However, EARN YOUR STRIPES wired SUPREME SOUL at exercise Monday morning, 1:13.2 to the stayer's 1:14.2, a five-length rule of thumb, which doesn't bode well for the Jamaica Two-Year-old Stakes runner-up, unless the pace absolutely collapses on Guineas Day.

RUN THATCHER RUN is the horse with the toughest prep run coming into the Guineas, tracking a ridden-to-lead JAMAI RAJA, before moving simultaneously with an already-in-flight SARATOGA SIGHT, running very wide off the turn and enduring a bumping match, which almost turned him sideways, then quickening to hold a charging MASTER OF HALL at bay to win by a head, allowing the closer seven pounds.

The acceleration shown by RUN THATCHER RUN, when pounced on by SARATOGA SIGHT, an open allowance horse, who had slipped back to overnight, suggests his turn of foot will be too lethal for his three-year-old peers, as was the case on his second outing in the Jamaica Two-Year-Old Stakes.