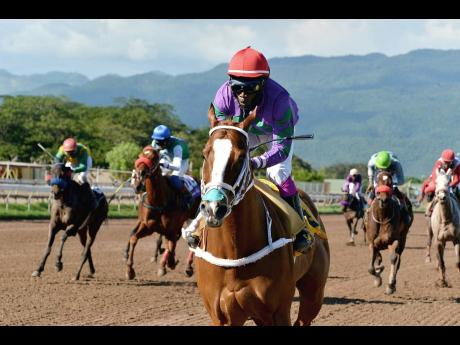 Markofaprince, winning the sixth race with Christopher Mamdeen aboard at Caymanas Park, on Saturday, January 19, 2019.

IT’s no secret that whenever a jockeys’ championship battle involving Omar Walker appears to be a possibility, overall support for his rival skyrockets. Therefore, do not be surprised that, after landing a four-timer on Wednesday, claiming apprentice Christopher Mamdeen, who was relatively quiet for most of March, could follow with a three-timer on Saturday, including SENDAMESSAGETOMAMA in the Jockey’s Guild Trophy co-feature.

Mamdeen opened the 10-race programme with 1-2 favourite, PHENOM, before landing a hat-trick to close the card - back-to-back outsiders, LADY IN THE ARENA and KEY WITNESS, at odds of 11 and 12-1, respectively, both storming past rivals a half-furlong out, followed by gate-to wire winner, JUST TRICK ME, running at 5-2.

Though the winners won’t similarly line up on Saturday, Mamdeen still looks hot aboard the maiden BLU ATTITUDE in the third, MY SUPER GIRL in the sixth and SENDAMESSAGETOMAMA in the night pan.

BLU ATTITUDE is nicely drawn on the faster stands’ side, right alongside the horse to beat, speedy but short-running MOTHER NATURE, with female rider Natalie Berger. On paper, MOTHER NATURE should make all but she is giving improving BLU ATTITUDE nine pounds, with a stronger rider aboard, in what should turn out to be a match race.

Philip Feanny’s MY SUPER GIRL, unraced since flopping as the 1-5 favourite in the New Year’s Day Trophy, failing to hit the board, should run off as the favourite with Mamdeen at six and a half furlongs, backed by glowing exercise reports.

It was rather un-Feanny when the veteran, 14-time champion trainer turned out MY SUPER GIRL for three races in 17 days, culminating in a disappointing effort at six and a half furlongs, after a hell of a battle against BRANDY at a mile 10 days earlier.

Feanny has since gone back to the drawing board with the four-year-old filly, who is now rested and excited with a bullet work, 1:06.3 for five and a half, on March 15.

Beaten by Feanny’s out-of-class MESSI on March 23, Errol Waugh’s SENDAMESSAGETOMAMA has fully paid his due to non-winners-of-two, racing prominently and losing to horses who have been holding their own, example SON SON, who beat non-fours, and, up to two Wednesdays ago, BAD BOY TRUMP, scoring a victory among non-winners-of-three.

Mamdeen needs only to sit in the cat bird seat while KALAHARI and KAPPONE set up the seven-furlong race for him to pounce coming off the home turn.