Run Thatcher Run all the way 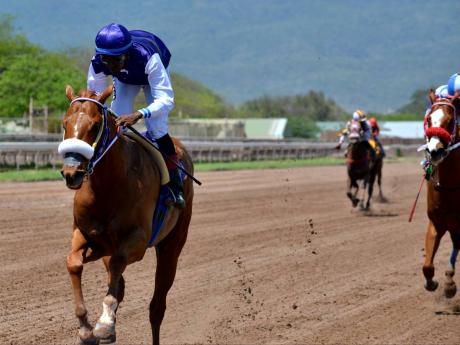 HAVING breezed through last Saturday's multiple-choice section of his 2000 Guineas mock exam, chasing and putting away ageing speedster CRUCIAL APPEAL at six furlongs in a raceday-leading 1:12.3, last year's back-from-injury Jamaica Two-Year-Old Stakes winner, RUN THATCHER RUN, sits a two-question paper this week - MY ELLE BELLE and SARATOGA SIGHT - at seven and a half furlongs.

Accompanied by four stablemates in a 15-horse field, which gives champion trainer Wayne DaCosta a third of the runners in the overnight allowance event, RUN THATCHER RUN has absolutely nobody to test him on the lead, bar former DaCosta inmate, seven-year-old MR AMBASSADOR.

Unlike Saturday's race when GO GO GIRL, then CRUCIAL APPEAL, made things interesting for the first three furlongs, before Omar Walker had enough of their antics, RUN THATCHER RUN will be sauntering on the lead this weekend, certainly to the top of the lane, before it's bye-bye time and catch-me-if-you-can.

Though he didn't look all that fluent over the last furlong, which he completed in 14.1, what's to be noted is that he hadn't raced in three months and was rushed back into track work, getting three gallops and a pace spin, in the space of 11 days, not even two weeks.

Therefore, to produce 1:12.3, two weeks after being reintroduced to track work, clapping splits of 23.0, 34.2, 45.2 and 58.2, RUN THATCHER RUN on a relaxed lead will be poisonous to MY ELLE BELLE and SARATOGA SIGHT, horses who will have to be off their bridles while Walker is taking air samples of Wednesday's Riverton Dump fire, leaving the three-pole.

At 115lb, in receipt of seven pounds from SARATOGA SIGHT, the more consistent of the two stayers, RUN THATCHER RUN is among the lighter horses in the race, bar STORM, whose connections, similar to last Saturday, seemingly has a pact to follow wherever RUN THATCHER RUN goes.

Astute punters will be watching the clock, wind direction, track condition and ease of victory to make their final decisions, though some will want to wait until the afternoon of Sunday, April 14, to declare their 2000 Guineas choice.

It will be interesting to see which of the two rival camps, DaCosta and Anthony Nunes, draws first blood in what will be another intriguing duel for the trainers' championship.

Nunes has two brigades, his 1000 Guineas hopes led by CORAZON and PRINCESS AVA, bolstered by new recruit I A M DI ONE. In the 2000 Guineas, Nunes' SUPREME SOUL is the ante-post favourite, closely followed by TOONA CILIATA, EARN YOUR STRIPES and, don't forget, DON ALMIGHTY.