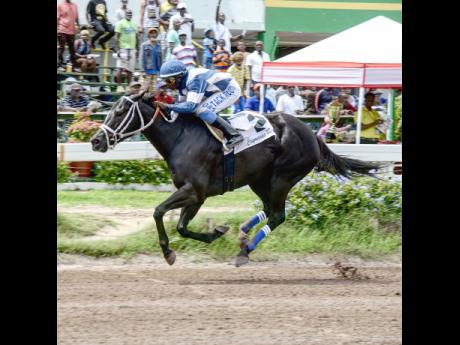 NUCLEAR FLIGHT seemingly has the handicaps against her, against familiar foes, renewing rivalry with PEKING CRUZ and ANOTHER BULLET in tomorrow’s open allowance sprint at five and a half furlongs. However, the much-improved four-year-old filly can still pull a victory from her bonnet, using her rail-hugging draw and terrific pace to floor the boys.

Far from disgraced against 2015 St Leger winner SUPERLUMINAL in a match race at seven and a half furlongs last time out, finishing a winded third, denied second place by pace-beneficiary HOUDINI’S MAGIC, cutting back to five and a half should be happy hour for NUCLEAR FLIGHT.

The handicaps against her are significant but must be taken in context of how the actual race should pan out, depending on post positions and respective weight allotments.

Whereas ANOTHER BULLET enjoys an 18lb weight swing after being beaten a length and a half by NUCLEAR FLIGHT at six and a half a month ago, the shorter distance will not be to his advantage, despite running an out-of-body race to beat her at the same trip, with 126lb, in the St Catherine Cup.

Having realised his folly of retaining heavyweight Simon Husbands for the rematch last month, trainer Patrick Lynch has sought to make amends by calling in four-kilo claimer Daniel Satchell. However, the apprentice is physically no match for experienced Husbands, who was able to have ANOTHER BULLET attacking NUCLEAR FLIGHT from the half-mile in the St Catherine Cup, eventually wearing her down close home.

In addition, the pace will be crowded up front with NUCLEAR FLIGHT drawn slap against the rail, which Dane Dawkins should retain from a very heavy PEKING CRUZ, as well as Anthony Nunes’ speedy pair of ADONIS and EXHILARATE, leaving ANOTHER BULLET with traffic to contend with.

PEKING CRUZ is the nagging speed that NUCLEAR FLIGHT will have to overcome to last home. Running in receipt of 14lb, she had rammed the chestnut gelding twice at five furlongs straight on February 13, resulting in her disqualification after passing the post a length and three-quarter ahead of CAMPESINO.

Having picked up six pounds from that run, NUCLEAR FLIGHT is eight pounds worse against PEKING CRUZ, who had 126lb. However, technically, there is no ‘weight swing’ because PEKING CRUZ is back carrying 126lb and will have to overcome that handicap to benefit from the six extra pounds NUCLEAR FLIGHT will carry.

What makes it worse is that PEKING CRUZ will have to be on the lead, battling the filly, as well as ADONIS and possibly EXHILARATE, depending on the tactics the jockeys on Nunes’ runners employ. NUCLEAR FLIGHT proved herself a sub-1:05.0 sprinter when beaten by ANOTHER BULLET, PEKING CRUZ’ closest being 1:05.1, under absolutely no pressure when beating WITHOUT EXCEPTION.

It is PEKING CRUZ who will have to defy the handicaps to beat NUCLEAR FLIGHT whereas ANOTHER BULLET will have to repeat his St Catherine Cup performance, which is a tall order, at seven years old, against the improving filly.