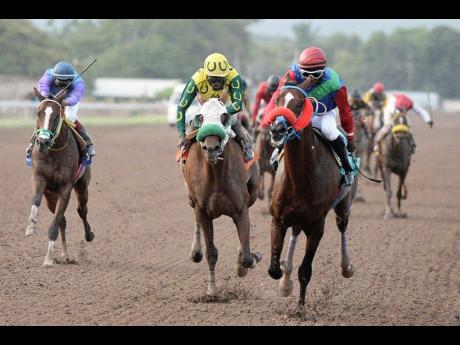 Superluminal with Omar Walker aboard (right) gallops to victory against Dontae Shane Ellis aboard (second right) to win the 10th race at Caymanas Park on Independence Day, August 6, 2018.

STOKED by NUCLEAR FLIGHT's avenging victory against ANOTHER BULLET at six and a half furlongs two weeks ago, trainer Gary Subratie has taken the gamble to stretch the Nuclear Wayne-City Flight filly even farther, taking on the likes of her stablemate, SARATOGA SIGHT, HOUDINI'S MAGIC, SUPERLUMINAL and HOVER CRAFT in Saturday's seven-and-a-half-furlong King's Plate.

Though she may naturally be the quickest runner in the 10-horse line-up, and still relatively light at 117lb, NUCLEAR FLIGHT faces a different kettle of fish in the King's Plate.

Unlike two weeks ago when Simon Husbands committed jockeyship suicide by holding ANOTHER BULLET off the pace, expecting hapless stablemate, SECRET TRAVELLER, to try pressing lone-speed NUCLEAR FLIGHT, the King's Plate runners won't be so kind to the four-year-old filly.

What she got away with in kind splits of 24.0 and 47.0, before increasing to 1:11.3, at six and a half, crippling ANOTHER BULLET, will be a different script in the King's Plate, especially with champion trainer Wayne DaCosta's three entrants in the mix - DRUMMER BOY, UNCLE FRANK and the closer, HOVER CRAFT.

Expect DRUMMER BOY to be on the lead with Trevor Simpson, keeping NUCLEAR FLIGHT honest for as long as possible, softening the filly for HOVER CRAFT to have a run at her in the straight. However, DaCosta's relay will most likely benefit SUPERLUMINAL because wherever DRUMMER BOY lets go, Parsard's runner will pounce on the leaders.

NUCLEAR FLIGHT can't win coming from behind so her rider has no choice but to keep her pretty much on the lead, with some amount of restraint, hoping to make a run for home. This time around, though, home is a furlong longer, unknown territory for her, but certainly not so in the case of stayers such as HOVER CRAFT and even her stablemate, SARATOGA SIGHT, who gets a 13lb weight swing on SUPERLUMINAL.

HOUDINI'S MAGIC is finally back among open allowance company but returns with topweight 126lb, his Achilles' heel, in which case the speed will have to absolutely collapse for him to win at seven and a half furlongs.

Of the four stayers, SUPERLUMINAL is, by far, the quickest, and has a rider with an allergic response to being among backmarkers. Therefore, expect Omar Walker to have SUPERLUMINAL perfectly poised coming off the turn with some distance between himself and DaCosta's horses, any of which he could have ridden, knowing his main danger, SARATOGA SIGHT, will be charging with 114lb.