Nelson on a double 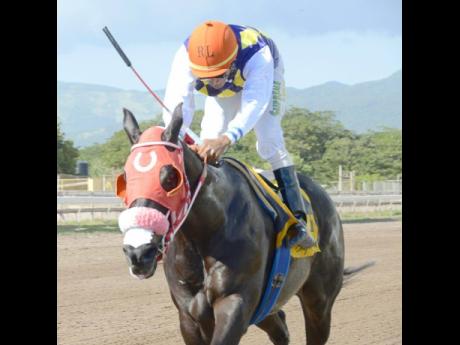 THERE's nothing worth saying about the Ash Wednesday Trophy, except ponder how far STRANGER DANGER will stroll home, because it is already accepted that Wayne DaCosta's unbeaten American will be a money-back favourite, one of the many to have dominated the last two or three race meets.

The divided three-year-old maiden event at seven and a half furlongs should also result in two winning favourites, EXTRUDER and CRIMSON, Dane Nelson aboard both, after piloting them to second-place finishes behind KINGSMAN and PRINCESS AVA, respectively.

Despite showing ability, which should get them over Wednesday's maiden hump, EXTRUDER and CRIMSON both appear to be average runners, compared with their more forward counterparts preparing for the Guineas after showing classic potential.

CRIMSON will report fitted with blinkers for his third start after confirming last time out that he would prefer a distance of ground, though beaten by a filly, PRINCESS AVA, at a mile. A full brother to SARAH LEE, a middle distance runner, at best, CRIMSON's losing time at a mile, 1:41.2, was way better than those of ENVISAGED and SEBASTIAN that same afternoon.

If there's to be a springer in the race, Adin Williams' LAYU KAWEN might be the horse after finishing fourth, six and a half lengths behind KINGSMAN, gaining, at six and a half furlongs. Bred Deputy Glitters-Aguila, LAYU KAEWEN's second dam, UNDER THIRTY, is a winner-producing mare.

Meanwhile, EXTRUDER, try as hard as he could, was no match for debutant KINGSMAN last Wednesday. A half-brother to Blue Pepsi Lodge's SENDAMESSAGETOMAMA, EXTRUDER, an Adore The Gold offspring, also stayed on willingly in his last race when stretched out at six and a half after competing in sprints.

Trainer Spencer Chung has removed the figure eight in which he tried EXTRUDER behind KINGSMAN, probably not seeing much difference when compared with his first two runs without the equipment.

This, however, is EXTRUDER's easiest assignment to date after having no chance against Ian Parsard's pair of FATHER PATRICK and KINGSMAN, races which sandwiched a five-furlong sprint in which he was fifth behind ONE SOO TRUE, RAW LIQUID and last Saturday's winner, SOUL CURE.