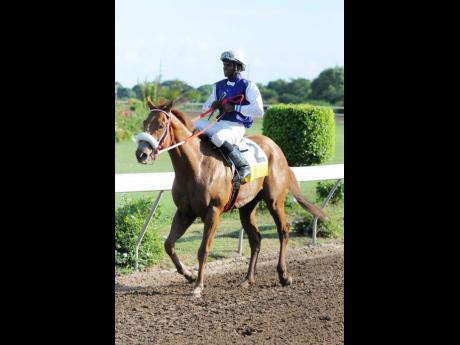 Walker’s Guineas outlook could become even more complicated with Wednesday’s debut of Parsard’s KINGSMAN, an in-utero colt, who blazed five and a half furlongs in 1:06.3 last Thursday morning after galloping seven furlongs in 1:30.4 the previous Monday.

The six-time former champion jockey swept Saturday’s feature races, the Sir Howard, followed by the ‘Lindy’ Delapenha Memorial and Hot Line Stakes for DaCosta, setting up a four-timer for his mainstay and 18-time champion trainer.

However, with FATHER PATRICK unbeaten in two races, clocking a solid 1:12.0 for six furlongs in the Sir Howard, Walker must be closely monitoring the progress of RUN THATCHER RUN, who is on his second week of trotting, recovering since January 12 when he galloped 1:06.3 for five and a half furlongs at exercise.

Parsard, however, is aware of the relationship between DaCosta and Walker, a team that individually broke the record for most races won by a jockey and trainer in a single season, before a famous bust-up made them part ways for three years, reuniting in 2015, resulting in two Diamond Mile victories, a Triple Crown and a Superstakes win, amid scores of other big races.

As he anticipated a big run from KINGSMAN at six and a half furlongs on Wednesday, Parsard said he is keeping his jockeys’ options open while preparing his horses for Guineas weekend, starting Saturday, April 13 with the 1000 Guineas and Saturday when the boys square off, both at a mile.

“It always gets interesting with the riders around classic time,” Parsard told Track and Pools. “First, the important thing is to get the horses qualified. Omar has always worked very well me. In fact, he rode my first winner as a trainer and we have always had a very good relationship since, personally and professionally. However, I am keeping my options open with several jockeys because I think we could have a couple horses for the Guineas races,” he added.

Parsard said FATHER PATRICK was always waiting in the wings, from as far back as last August.

“He was ready to race from last August but every time we checked his knee, he wasn’t ready. We were advised that the line of horses tend to be precocious, but if you didn’t wait it wouldn’t work out well,” he pointed out.

“Coming up to the classic season, the wait was definitely worth it. He is a very fast horse and certainly has some class. Whether he gets guineas mile is left to be seen,” he added.

Though KINGSMAN, bred Discreetly Mine-Feasibility Study out of 1999 Belmont Stakes winner, Lemon Drop Kid, has sparkled at exercise, Parsard said he wants to see what the bay colt does on raceday.

“I like to see them do it on the raceday. Before that, it’s potential. When they do it on raceday, you know you have a special horse,” he pointed out.

KINGSMAN, he said, “represents some significant investment the family made three years ago by importing pregnant mares”.

“He is one of two offsprings we kept from that batch. He is a May colt so he is late. For him, we had to wait in an inordinately long time. Clearly, he has potential but I will wait until raceday before I make any further comment,” he said.