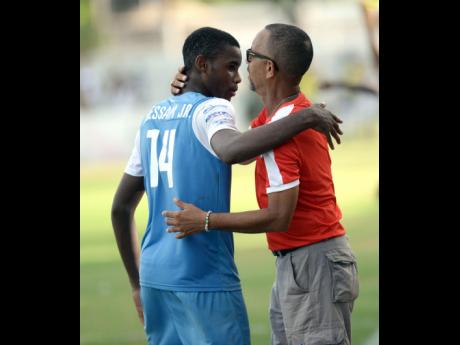 This season, St George's College's Manning Cup coach Neville 'Bertis' Bell has created another exciting and awe-inspiring team, which has played some breathtaking and exhilarating football.

Since early season, the Georgians have been touted as favourites for the Manning Cup title and their performances so far have proven that they are the schoolboy team to beat this term.

However, after defeats in the first round to Innswood and Denham Town, some observers labelled Bell's team soft.

The charismatic coach, however, does not accept that notion. He believes teams really come hard at them but says his players have no doubt about their abilities.

"A lot of people think we are a soft team because we love to pass the ball. Nobody expects us to play tough, but the St George's team is a confident team. It's no surprise how teams play (hard) against us. They come hard, they play the ball long and rush us.

"But we expected that, and for a young St George's team, I think we are handling the conditions very well so far. We are a confident team, we knew what to expect and we are not surprised, and I think we have handled it well, but it gets tougher and tougher," he said.