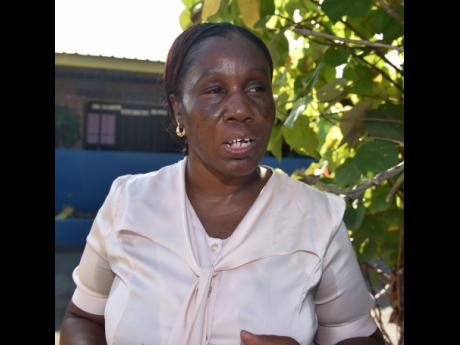 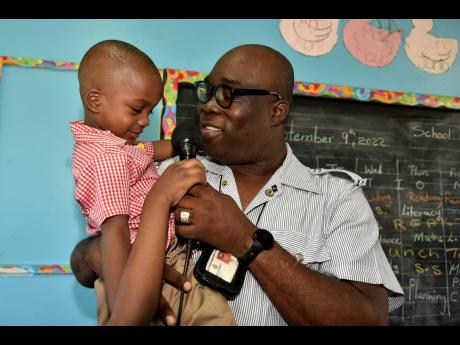 Sergeant Alex Bloomfield, sub-officer at the Safety and Security branch of the Jamaica Constabulary Force, interacts with Visanie Smith, a student of Balcombe Drive Primary and Junior High School yesterday.
1
2

A father expressing fear over the safety of children in Balcombe Drive has called on persons in the gritty Olympic Gardens community to be more united in the fight against crime and violence that continues to plague the area.

The concerned dad, Camelo Clarke, spoke with THE STAR yesterday morning during a special re-welcoming ceremony at the Balcombe Drive Primary and Junior High School. The learning institution was forced to close its doors last week due to violence.

"We know that bullets don't have eyes nor does it respect persons," said Clarke, while reflecting on the fact that two of the shooting incidents last week took place in close proximity to the school.

He is concerned that children could be hit by stray bullets. Faced with this chilling possibility, Clarke walks with his eight-year-old son to school each day.

He believes that only a concerted effort between the police and citizens can rid the community of criminality.

"The unity is not there, enuh, and because of that all wi can do at the moment is to beg the thugs dem to put away the guns because the violence is only affecting the future of the children," he told THE STAR.

His words were matched by the school's principal, Yvette Foster, who also highlighted a lack of proper parenting as one of the underlying issues for the violence.

"Last week we had plans for our orientation because we wanted the parents to come, because you don't see some of the parents again after they drop off the children here on the first day. So our plan was really to use up last week to have some sit-in with the parents, get some feedbacks to see what is holding them back out there. We had to push that back and we are now hoping that we can get it done this week, but when we have these spat of violence it really affects us, and it affects the students mentally," she said.

Stacy Ann Gordon, whose three kids attends the school, is fearful of the dangers the children are exposed as they journey to and from school.

"You know children will stop and play and find ways to enjoy themselves and it is there that they can be caught in a crossfire, because you don't know what can happen at any time," Gordon said.

She has welcomed the increased presence of the police officers in the area and the re-welcoming ceremony held, stating that the two will help to calm the nerves of the youngsters' traumatised by the recent shooting incidents.

"It will relieve some of the fears amongst the parents because once they see the police they will be more confident, knowing that the police will basically secure their child travelling. I also think the gesture by the school will show other parents that they care and will somewhat make them feel less fearful," she said.