D’Angel plays farmer for a day 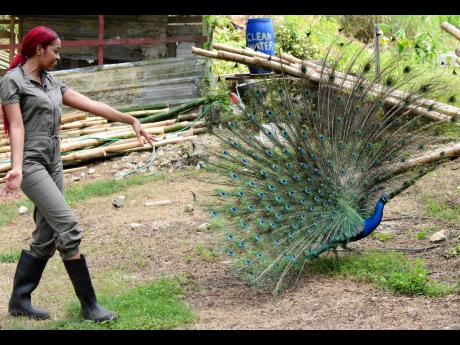 D&apos;Angel struts with Mr Bojangles on the Little Orchard Farm in St Catherine. 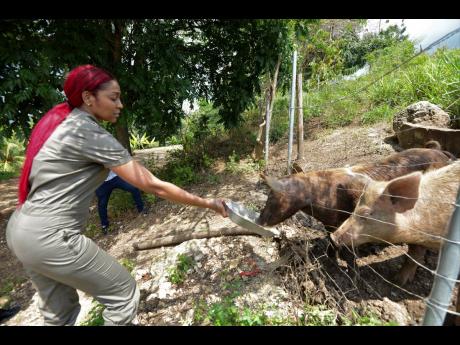 It wasn’t her favourite part of the day, but D’Angel made sure the pigs were fed. 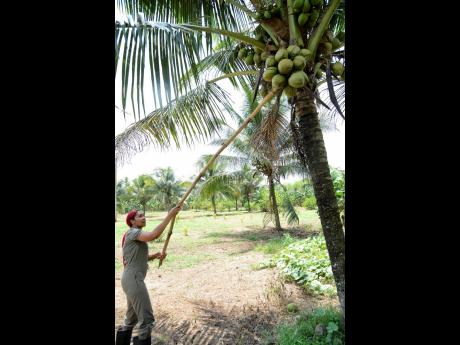 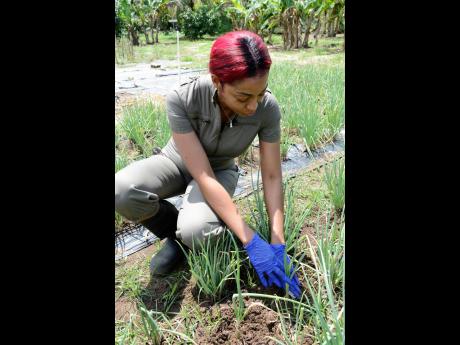 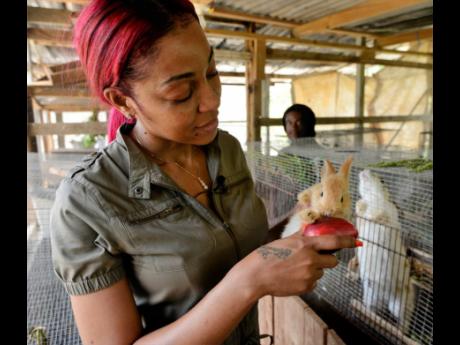 Eat up, little rabbit. D‘Angel feeds one of the adorable animals with an otaheite apple.
1
2
3
4
5

Dancehall fans are probably used to her as the well-manicured, fashion-forward ' Frighten Friday' singjay who's known for her dramatic performances onstage.

But last Tuesday, D'Angel had a go at another profession; she played the part of farmer for a day at the Little Orchard Farm in Linstead.

The WEEKEND STAR learned that dancehall's 'First Lady' was more than able to complete the tasks prearranged for her, which included planting and reaping, as well as feeding various animals on the 35-acre farm getaway.

"I have a lot of respect for the hard-working farmers in Jamaica ... especially those that know the importance of getting the tasks done to make a living to take care of their families," D'Angel said as she made the trek up the tree-bordered pathway to the farm.

She did not leave fashion off her list of things needed for the day. Dressed in sexy overalls and water boots, she came prepared for a hard day of work.

The only thing missing was a pair of gloves. Not to worry; Little Orchard's representatives, Teshayne, Kris and Shane, were on hand to assist with a pair.

The first stop was the 'cho-cho' patch, and the activities got more exciting as the day progressed. from apple picking escallion planting, to tasting moringa leaves, finding the fittest breadfruits and using a stick to knock coconuts to the ground, all tasks were rewarded with cool, refreshing coconut water and a jelly snack.

The singjay revealed that she had never had a farm experience prior, although she is all about the 'grow what we eat, eat what we grow' lifestyle.

"This is definitely a first for me, getting one on one with nature this way," she said. Little did she know that she was not prepared for what was to come next.

The animals were more than welcoming, except the pigs, whose grunts frightened D'Angel as she attempted to feed them.

"The rabbits were easier; I got up close and had no issues with holding them, although the baby one did not want the Otaheite apple I tried feeding it," she said.

The pet peacock, Mr Bojangles, was clearly her favourite. He showed off his colourful trademark fan of feathers as if strutting his stuff for the unfamiliar female visitor. that had D'Angel marvelling at the beauty of the male bird for more than half an hour.

"The overall experience was great; it was educational and entertaining in some ways. I learned to correct way to plant 'cho-cho' and escallion, among other things like knowing when breadfruit and pumpkin are ready to be reaped," she said happily as she packed up her farm-fresh goodies.