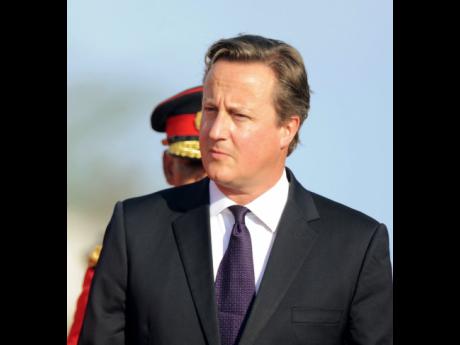 These persons were the UK Prime Minister, David Cameron, the prime minister of Japan, Shinzo Abe and a member of the English Royal family, Princess Anne. One thing wid we likkle island though enuh in spite of all our problems our country remains very attractive to those looking on from abroad and we, undoubtedly, received positive exposure from the said visits.

Mi know others a look on and wish a did dem especially like how a just wah day President Obama was here! As PM Cameron did ah leave ah so PM Abe ah come! It remind me ah di likkle pickney game we used to play - room fi rent apply widdin when I run out den you run in!! Mi naw tell nuh lie....mi did ah hope seh de man dem did ah bring nuff, nuff benefits fi we. Mi ah talk bout ah whole heap ah tingz! Some trade agreement, some educational opportunities, and less restrictions in terms of being able to go England!

Right now we (especially me!) coulda use nuff nuff foreign exchange like some serious English pounds! This would enable many hard-working and ambitious Jamaicans to do better for themselves and families, and by extension, our beloved country. The Japanese gi wi some stuff and we glad fi it! Yeh - Shinzo me dupes! Big up yuh nice, clean self. Come back quick wid nuff more tingz cause if it mean to seh we haffi go start learn Japanese so we can progress inna life a dat mi want hear bout! We can reciprocate by dashing on some free ackee and salt fish pan yuh and lotion and rub yuh scalp! Yeah ... ah dat mi seh!

The announcement that stimulated a lot of debate was that by PM Cameron who said that the UK would give Jamaica 25 million pounds Sterling to build a prison. When mi hear bout de money part mi seh - big up PM Cameron and start fi buss a "lalalalalalalaaaaaaaaaa"! When mi hear seh ah prison it a go use fah mi start fi think bout it.

The issue raised a lot of questions - do we really need another prison right now? What will be the total cost of the prison? How much money will Jamaica have to contribute to this project, particularly since the government always ah bawl dat it bruk? Is this really being done for our benefit or is it convenient for the English who want to send back Jamaicans serving time in English prisons? What will it cost the country to maintain this prison and feed these prisoners if, and when, they return? Can the money be better used to build factories and schools? Is Jamaica the only country being asked to enter this "prisoner exchange agreement"? Has Britain made the same proposal to Nigeria and Northern Ireland since they have more prisoners in the British system than Jamaica?

Then there was the burning issue of reparations which has been gathering momentum for some time now. People seh dat fi

As a matter of fact when slavery was abolished the slave owners got reparations. So why the descendants of African slaves mustn't get as well?!

Some people a seh they found his tone very condescending and took umbrage to his suggestion that "we should move on from that painful legacy..." PM Cameron how come yuh tell the Jews and di world never to forget the Holocaust but yuh want we forget an atrocity that killed millions and lasted over 300 years?! Even being so-called "independent" since 1962 nuff people feel dat we still ah suffer from slavery, mental and otherwise. Our National Hero, Marcus Garvey, talk bout it and Bob Marley sing bout it.

Should PM Cameron have apologised for the UK's role in slavery? Should he have brushed the reparations issue aside as he did? Should he have come with a better approach at reconciliation? Anyweh him deh him ears supposed to a ring because nuff people bex bad.....and a talk di tings dem!