From My Notebook| We can't forget slavery 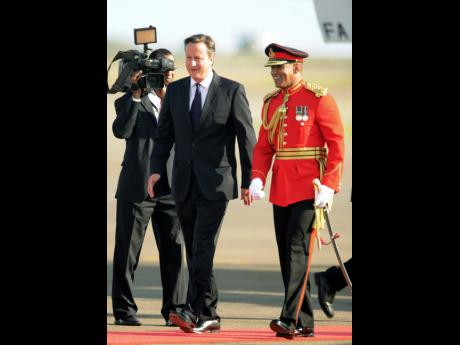 In mid-September, the Telegraph reported that British Prime Minister David Cameron announced that his Government would increase funding for the Holocaust Educational Trust (HET) by an extra 300,000 pounds a year.
That money will allow more children to take part in the trust's Lessons from Auschwitz Project, which allows students and teachers to visit the former Nazi concentration and death camp Auschwitz-Birkenau.
Not only that, the Prime Minister also launched a new national Holocaust commission. This commission will set up a permanent Holocaust memorial in Britain.
"At a time when anti-Semitism is returning in some parts of mainland Europe, it is more important than ever that - as a whole country - we do everything possible to make sure that the memory of the Holocaust is preserved from generation to generation,î Prime Minister Cameron said, in reference to the more than six million Jews who perished during World War II.
This is the same man, who just two weeks later, arrived in Jamaica and told our leaders, who are looking for reparations for the ravages of more than 300 years of slavery, that we must forget the horrors of the past and move on. By the way, we want you to help us build a prison here so we can ship your criminals who committed crimes in the UK back home to you.
Prior to his visit here, I was indifferent to Prime Minister Cameron. I have my views on several world leaders based on what I see on the news and read online each day. For example, I don't trust Russian President Vladimir Putin. I just think he is one half of Pinky and the Brain and each night he plots to take over the world, but when it comes to Cameron, before this week, he was neither here nor there. I don't get the impression he is well-liked, but one doesn't have to be well-liked to be a good leader.

move on
However, after his comments about moving on from slavery, I know now I don't like him, especially in light of his comments about the Jews, a fortnight before arriving in Jamaica. Great Britain built much of its wealth off the backs of the millions of slaves, who were brought to the Caribbean for almost 200 years. When slavery was abolished back in the mid-1800s, those slaves still had to work to 'buy'their freedom from their masters.
During their time in slavery, our ancestors would last approximately seven years before they died from overwork, poor diets and having to sleep on dirt floors. It was worse if they were owned by the church because their life expectancy then was only three to three and a half years. During that time, the women were also raped and abused by their owners.
Slavery left their survivors broken and we are still trying to be fixed more than 100 years later. This is what Prime Minister Cameron wants us to move on from. He wants us to move on and accept as a token, a prison to hold Jamaican prisoners. By the way, our Government would have to find the money to care for these prisoners.

barefaced insult
The offer is a slap in the face, a barefaced insult to the people of this country and to our government.
What the British Prime Minister has come to our house to tell us is that our suffering matters very little, but the Jews, those guys cannot be forgotten. Six years of suffering and six million deaths matters far more than the centuries of slavery during which an estimated four million died while still in Africa after being captured and an estimated 1.2 to 2.4 million more dying en route to the Caribbean stacked like sardines in a can. God knows how many more died from the hard work and the beatings.
But then we should not be surprised because Cameron's family was among those who were compensated by the British Government when slave trade was finally abolished.
To this day, not one slave was compensated for being forcibly transported from his homeland, forced to lie in his own waste for months and then put to work without pay and very little to eat. This is what he wants us to forget.
In the same breath he dares to call us 'friends'. With friends like him, who needs enemies?