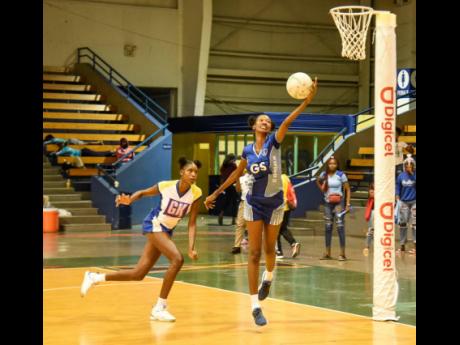 Glenmuir created history in their first Rural Senior final, as they pulled off a 39-35 victory over Manchester High after leading 11-8 in the first quarter, 18-7 in the second and 27-25 in the third, while St Catherine held on for a 26-23 triumph over Gaynstead High.

According to Reid, his girls were motivated after their Junior team lost the final to Holmwood earlier at the same venue, while they also used the grief that Junior coach Annette Daley was undergoing as inspiration.

"I am extremely elated as this is my first under-19 title as a coach despite winning at the under-14 and 16 levels in the past. The girls were determined to make up for the Juniors' loss and they were really pumped up and motivated.

"They also wanted to win for Annette Daley, mentor and part of the coaching staff who recently had a death in her family. We did this also for the parish of Clarendon and for the Glenmuir fraternity led by our Principal, Dr Marsha Smalling, who has supported the programme one hundred per cent," said Reid.

New champions were also crowned in the Urban final as defending champions Gaynstead suffered their first defeat of the season, which placed St Catherine's coach Thompson on cloud nine.

In the Rural Senior final, Glenmuir, with their tall players, hovered over the smaller Manchester players, which they used to their advantage with goal shooter Shanai Martin hitting the target in 29 of her 34 attempts. She was assisted by goal-attack Nickeisha Powell with 10 from 14, as lanky goalkeeper Fentonian Henry was named MVP. Goal shooter Tori Mendez with 25 goals from 43 attempts was the top scorer for Manchester.

In the Urban Senior final, Gaynstead, down six goals at the end of the third quarter, had a gallant attempt in the fourth, but St Catherine held on for the win. St Catherine's goalkeeper Kaydeen Gordon was named MVP as goal shooter Kellian Hunter top scored with 22 from 28 attempts and goal-attack Kayla Wright had four from five.

In a very close encounter, favourites Holmwood had to dig deep to score a 31-30 win over Glenmuir for the Rural Junior title while St Hugh's surprised the previously unbeaten Immaculate 31-22, for a comprehensive win to cop the Urban Junior title.