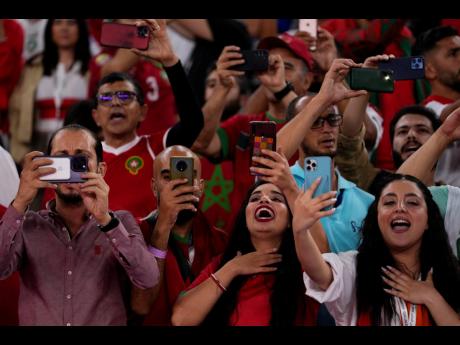 Morocco fans cheer prior of the World Cup Group F football match between Canada and Morocco at the Al Thumama Stadium in Doha , Qatar on Thursday. Morocco won 2-1.

First Qatar was out, exiting the World Cup with the worst record of a host country. Then the Saudis' run ended, despite a historic upset against Argentina last week. Finally, Tunisia was eliminated, after a dramatic victory against already-qualified France.

Now, at the first World Cup ever to be held in the Middle East, Morocco is the Arab world's last hope. The fractured region is rallying around the north African nation after their 2-1 win Thursday against Canada that advanced Morocco to the tournament's knockout stage for the first time since 1986.

Morocco's success sparked angry street riots in Belgium after a match earlier this week, but on Thursday triggered an outpouring of joy in the Arab world, where local teams are often underdogs.

Jubilant Moroccans, Qataris, Saudis, Palestinians and others poured through historic alleys of Souq Waqif in central Doha after Morocco's win, clad in red and green and waving the Moroccan flag wildly in celebration. The flag illuminated skyscrapers along Doha's glittering corniche.

Streaming crowds chanted, "Congratulations to us on this beginning! It will go on and on!" The metro near Al Thumama Stadium became a pulsing dance party of Moroccans drumming on the windows and ululating in celebration.

"All the Arabs left the tournament, but we made it up for them and we got our revenge," said Najwa Boumahraz, a Moroccan living in London. "We are very proud."

Malika Jellal, a businesswoman from Casablanca, Morocco, said she felt like a celebrity on Thursday.

"Arabs keep coming up to me and saying 'thank you, you honoured us, you saved us all,'" she said.

A pair of Saudi brothers who had flown to Doha to see the match from the eastern province of Dammam said they were so proud of Morocco that they forgot their sorrow that their team was headed home.

"Over this week we feel that as Arabs, we are all one people," said 23-year-old Saudi Turki al-Qahtani, draped in a Moroccan flag. "We forget about borders in this World Cup."