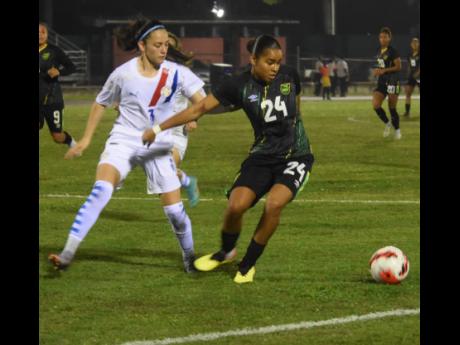 The Reggae Girlz left it late but drew first blood in the first of two international friendly matches with Paraguay for a 1-0 win at the Montego Bay Sports Complex in Catherine Hall, last evening.

Just as most of the fans seemed to have accepted a drawn result and some started to leave the stadium, Alysson Swaby struck in the second minute of stoppage time, slotting home from close range, a ball that fell for her from the visiting defenders' failure to deal with a corner.

In a game of two halves, the Reggae Girlz dominated the first stanza but failed to break the deadlock despite creating several chances and even hitting the woodwork.

Star striker and captain Khadija 'Bunny' Shaw was denied by two good saves from Paraguay's goalkeeper Alicia Bobadilla in the 17th and 26th minutes and saw another shot hit the crossbar minutes later.

Bobadilla was called into action again in the 43rd minute when Paige Bailey's shot from a through pass hit the right boot of a well-positioned custodian.

With head coach Lorne Donaldson reeling out the substitutions, the Reggae Girlz's intensity and patterns of play were not the same after the interval, which Paraguay found comfort in.

Jessica Martinez injected life into the visitors' play after unleashing a powerful shot from inside the left of the penalty box, but an equal right palm of Schneider came to the rescue. A minute later scrappy defending from the hosts forced Schneider yet again into a save.

Donaldson said despite not playing the best game, he is proud of the resilience the Reggae Girlz showed.

"In the first half we were very good and should have put something in the back of the net, but it didn't happen. When you start rotating players there will be players who have not played much for Jamaica that will have some nerves. In the end, that same group found a way to get it done and that's the resilience of a Jamaican team.

"I thought Schneider came in and made a couple of big saves that kept us alive and in the game," Donaldson said.

He admitted Shaw could have walked away with a hat-trick and applauded Paraguay's custodian who kept her at bay.

"That's the life of a striker. On another day she could score three. Let's give their goalkeeper credit, she made two good saves off her," Donaldson said.