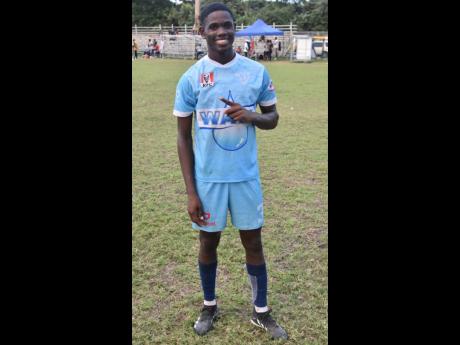 Edwin Allen High’s central defender Kimolar Fearon, after scoring the winning goal against Dinthill in the quarterfinals of the ISSA/Digicel daCosta Cup competition at Drax Hall on Wednesday.

Fearon scored in the last two games of the round of 16 and was the hero for Edwin Allen, enacting sweet revenge with a 1-0 quarter-final win on Wednesday over Dinthill Technical High, who knocked Edwin Allen out at the round of 16 last season.

He is happy to be scoring goals at the business end of the competition, even more exciting as it was crucial to them getting results when it mattered most. His goal was enough on Wednesday.

"It feels very good because as a senior player I know the responsibility is on me also although it's a team.

"I want to continue scoring goals so I have to keep believing and depend on my teammates because the assist was a very good one from (Clayton) Peck. We will go back on the training ground to keep it going," he added.

Fearon said recent training sessions have contributed to him hitting a purple patch.

His comments were after silencing the crowd at Drax Hall, St Ann, in the first of three games in the quarter-final group, when the tall six feet one inch defender rose like a tower, unleashing a bullet of a header into an empty goal past an outrushing the goalkeeper to seal the win.

"I am a centre half so my main job is to keep clean sheets. The goalscoring comes from having more tactical training sessions and understanding the coach's philosophy more. Hence the goals in these three games are not a surprise," said Fearon, who was looking forward to carrying his form into the clash with title favourites Clarendon College on Saturday.

Edwin Allen's coach, Tafari Burton, who lauded Fearon with praises, said it is pleasing to know that he can depend on a senior player when his back is against the wall.

"Every goal is important and when you see your centre half scores, you have to appreciate it. For him to score three games in a row, it's just love. He is a senior player and in big games, you ask them to stand up and that's what he did. This is his moment because he also had a good game defensively," Burton said.