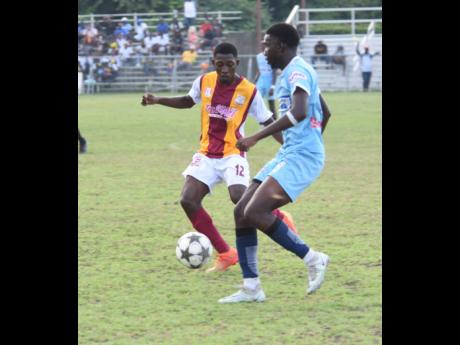 Tafari Burton, coach of Edwin Allen High, was not pleased with their performance but was happy that they defeated Dinthill Technical High 1-0 in their ISSA/Digicel daCosta Cup football match at Drax Hall, St Ann, yesterday.

"We really came for the three points and that's what we got. I am pleased with the win but not one hundred with the performance. We have some mental work to do with them".

"Tactically, we didn't look bad in the first half but I am a bit concerned with the team. What I realised is that if they believe that the challenge is not as hard, they take a step back. We didn't take advantage of Dinthill today," Burton said.

Dinthill didn't look their fluent best in the first half in the absence of playmaker Mikhaya McKoy, who was serving a one-match card suspension. The first stanza finished 0-0, despite the ebb and flow.

The match intensified after the break, but it wasn't until the 69th minute before Edwin Allen stunned the St Catherine-based Dinthill.

Tall central defender Kimolar Fearon rose like a tower, unleashing a bullet of a header into a scarcely protected goal, after Dinthill's goalkeeper Rahiem Riley rushed out for an out-swinging corner by Clayton Peck and failed to get a hand on the ball.

Dinthill threw everything at Edwin Allen in the dying moments of the game with even goalkeeper Riley trying to redeem himself by coming out as an on-field player, however, Edwin Allen's defence led by Fearon was resolute to hold on for a narrow win.

Assistant coach of Dinthill, Zekiel Simpson, believes that having players out and others not in the best shape hampered them, while they also made mistakes at the back, which cost them.

"I think the lack of personnel contributed to it (loss). We have players card-out and injured, however, with two days before the next game we can recover and come again.

"It was a little indiscipline on our part. Something we emphasise is matching height to height in the box and tracking, but our tall centre-half fail to pick up the tall centre-half and the goalkeeper made a poor decision leaving his line and couldn't get a touch on the ball, but it's one of those things," Simpson said.