Another 1-0 win for William Knibb 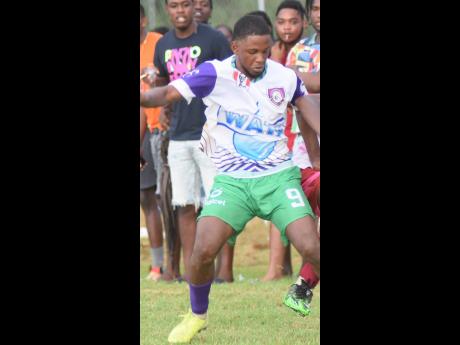 Another clean sheet from William Knibb High School was enough to hand them a 1-0 win over Cornwall College in their Group Two round- of-16 group clash in the ISSA/Digicel daCosta Cup football competition at Drax Hall in St Ann yesterday.

Mark Lewis scored the winner in the 11th minute for William Knibb.

It was the first time that Cornwall had failed to score this season and William Knibb coach Dwight Jeremiah was a proud man.

"When I walked into the ground a lot of Cornwall fans said we can't keep a clean sheet because this is our first real test. Coach Neville Bell sent me a text saying 'at this stage of the tournament with that amount of games you're playing, you must be doing something special no matter who you're playing'," Jeremiah said.

"Cornwall were sturdy and created chances but these boys put their bodies on the line literally. I think they are as eager to keep a clean sheet as they are to score a goal," he added.

It was the third 1-0 win in a row for William Knibb who have scored only three goals in four games since the end of the first round where they netted 49 goals in eight games. Coach Jeremiah said a win is a win whatever the margin.

"For me, I will grind out a 1-0 win to the title every single day. We are trying to build a culture at William Knibb. We don't have the pedigree of Cornwall so we have to win first and then work on philosophies and other stuff. I don't want to be the best team in the competition, I want to be better than my opponents on the day," the William Knibb coach said.

Dr Dean Weatherly, the coach of Cornwall, said they now have to focus on getting a good result in their last game of the round on Friday against Paul Bogle High.

"It was a game where we started a bit flat and paid dearly for it. We came into our own but missed a couple of chances that gave William Knibb the licence to come at us," Weatherly said.

"Despite the result, it was a very good game. We just have to look now at the next game on Friday and see how it turns out," he added.

The win took William Knibb to six points and are clear leaders of the four-team group. Cornwall sit third with three points. They are behind Dinthill Technical High School on goal difference after the St Catherine-based school defeated Paul Bogle High School 2-0 at York Oval in the other group game yesterday. Paul Bogle are still without a point.

Over in Group One, defending champions Garvey Maceo High were beaten 1-0 by Central High while Manchester High defeated Christiana High 2-1.