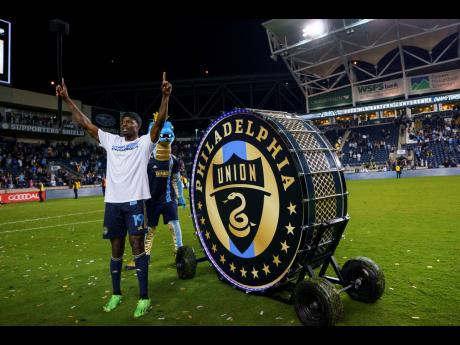 Philadelphia Union’s Cory Burke reacts after hitting the drum following the second half of an MLS football match against New York City FC on Sunday, in Chester, Philadelphia. The Union won 3-1 and clinched the MLS Eastern Conference title.

National striker Cory Burke along with national goalkeeper and captain Andre Blake could only watch from the sidelines as the Philadelphia Union lost against New York City FC (NYCFC) in last year's Eastern Conference championship.

This year in the rematch, Burke was hailed by his head coach Jim Curtin for his impact after the Union came back from a 1-0 deficit to get revenge 3-1 in Sunday's Major League Soccer's Eastern Conference final at Subaru Park in Chester, Pennsylvania. Burke was introduced as a second-half substitute after Maxi Morales opened the scoring for the visitors in the 57th minute and after Julian Carranza equalised in the 65th minute, he was involved in Daniel Gazdag's go-ahead goal in the 67th and got on the scoresheet himself in the 76th, the clinching goal to send Philadelphia to the title game for the first time in franchise history.

Both Burke and Blake were forced to sit out last season's Eastern Conference title to the same opponents because of COVID-19 protocols made several players unable to play. It would be a game that they would lose 2-1 to the eventual champions that year.

While his contribution this season has been mostly off the bench this year, Curtin praised Burke for his intensity and relentless energy that dethroned the reigning champions.

"It was a great performance. You are talking about a guy that changed the game. The way I would say is that he was possessed. That is the best way I could put it. He came into the game possessed," Curtin said after the game. "He came into the game wanting to take it over and played in a way that I wouldn't be surprised if the doping people are here to test him, because he was that intense and crazy on the field."

Burke scored seven goals and registered four assists in 33 regular season appearances for the Union this year and he said he was confident of his ability to change their fortunes this time around despite conceding first.

"When I was on the sideline warming up and I saw New York City score I didn't hold down my head. I knew once I got in this game, I was just going to bring the energy the team needed so that we could get back," Burke told the Philadelphia Inquirer on Sunday. "I can't be more proud of this team and myself as well to know that we dug deep."

His, Blake's and the Union's reward will be an MLS Cup final date with Los Angeles Football Club on Saturday.