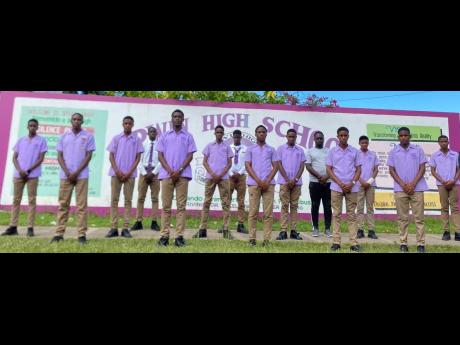 Mentor Fabian Kelvin (centre grey and black) stands with his players at the school.

Irwin High's sweet success off the field through their mentorship programme, spearheaded by the voluntary services of team manager Fabian Kelvin, is a silver lining, despite a bitter end on the field to their historic ISSA/Digicel daCosta Cup football season.

The St James-based school exited the competition at the second round, following back-to-back narrow 1-0 losses. This came after topping Zone A, undefeated while beating two former champions Cornwall College and St James High.

Kelvin, who is also the Insports officer for St James, said he does not mind the time and effort it takes as he is proud of the results, which are Caribbean Secondary Education Certificate (CSEC) subjects administered by the Caribbean Examination Council (CXC).

"I'm very proud of the programme. It's good to see that my team is out there and not playing dull, they have CXC subjects. We have to change the profile of how people see student-athletes. I am hoping other schools can adopt this mentorship programme. It is not just about exposing them early, it is changing their mindset on a whole," Kelvin said.

A proud principal of Irwin, Victor Newsome, explained that the players taking on two subjects at Grade Nine and 10, means it will not be as tedious at Grade 11 and it would be easier for them to matriculate to sixth form.

"We encourage them to take on some of the easier subjects that have a lot of practical areas first. It allows them to participate in extra-curricular activities while excelling academically. It's really bearing fruit and also acts as an encouragement to some of the students who are not on the football team or are in any extracurricular activities," Newsome said.

Kelvin believes that the programme was key in the cohesion and new-found belief within the squad this season.

"When I came in 2019 I realised it was a good crop of boys and I said to them that footballers had to be different. I started with three at Grade Nine and told them I'm going to give them some subjects to do. After they passed, we had 24 of them coming on board," Kelvin said.

"We are committed to what we are doing for them and they are loyal because of it. There is a love and family togetherness within the team and that is what made the difference for Irwin High this year," he added, before making special mention of working with their talismanic player Leo Campbell.

"Leo is a special player who is holding a CSEC as well. When he came on board he was not ready but after passing one, I know he is ready to go back and get some more at Grade 10."