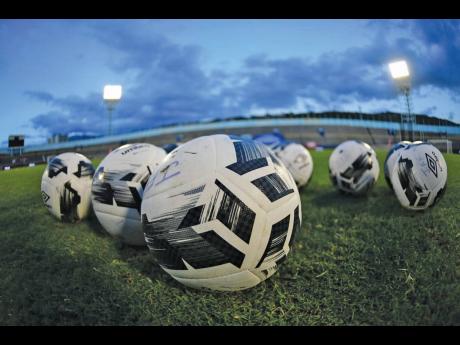 William Knibb Memorial High booked their ticket to the round of 16 in the ISSA/Digicel daCosta Cup football competition with a 1-0 win over Petersfield High School at Drax Hall in St Ann, yesterday.

Playing the first game of a double-header both teams entered the game level, after a 0-0 draw in the first leg.

The match started scrappily with neither team settling. Petersfield, however, were close to taking the lead in the 29th minute but Rahiem Kerr's lofted shot beat William Knibb's goalkeeper Kemal Benjamin, hit the bar and went behind.

William Knibb were more commanding after the interval and took control of the match, but had to work for the lead which the reliable Mark Lewis scored in the 59th minute. It was his 16th goal of the season.

Dwight Jeremiah, coach of William Knibb, admitted they did not play their best game, especially in the first half but said they never stopped believing.

"The game looked difficult and I understand that because of the mental weight that was on these boys' shoulders. I suspect that they will play more freely after this. Petersfield was no easy feat, their long ball play is not always easy to deal with and they are physical as well," Jeremiah said.

"It's important for these boys because there are people still doubting and we wanted to turn doubters into believers. The boys believed that they could and here we are the third season that we have shown progress," he added.

Jeremiah, despite a hard-fought second round, is happy that William Knibb maintained their record of not conceding a goal in the competition.

"I told them that this tie would epitomise the phrase of 'defence win championships and goals win matches'. Over the two legs, we did not concede and scored just one goal so that tells us that the defence was massive for us," Jeremiah said.

Godfrey Drummond, coach of Petersfield, believes they are somewhat unfortunate to be eliminated after their first loss of the season in a game in which they hit the woodwork twice.

"I think it was a very good season for us, we won more than we lost or drew. It's very difficult to lose only one game and be out of a competition but it is critical when you lose. We had a home game where we should have made it count and eventually we gave it up here," Drummond said.

"We are losing only five players out of this young squad. I hope they can use it as a learning experience. I am looking to see the youth teams because a number of the players will go down to the Under-14 and 16 so the future for Petersfield is in good hands," he added.