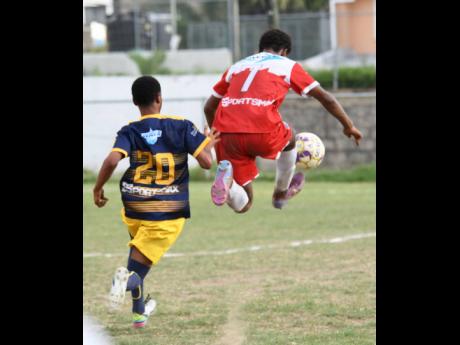 It may have been a nervous start to Campion College's second-round first-leg tie with Charlie Smith High but assistant coach Eric Rademakers was pleased with how his team asserted themselves as they look to continue a strong season.

Campion College's first second-round knockout game in 30 years ended in a 1-1 draw with Charlie Smith High yesterday at Ashenheim Stadium. Raequan Stoney finished from close range to open the scoring in the 36th minute but Kai Myles equalised in the 49th minute as the tie was left delicately poised with Friday's second leg looming.

While they have set new goals for themselves after a season in which they have ended a long second-round drought, Myles led from the front in guiding the expectations that he and the boys set this season according to Rademakers in their season opener against Clan Carthy High

"I think what we realised is that the mental part of it played a big role. We saw that after the first game and during the television interview with Kai his focus was right in saying that it is the second round we needed to make," Rademakers told STAR Sports. "The boys set that goal to make the second round. They have reached there but we move on and we set new goals for ourselves. So let's see how far we can reach."

He is hoping that Myles gives them the best chance of extending their stay in the schoolboy football competition, with his play being one of the key reasons why Campion are in the position they are in now.

"He is somebody that we have up top who can hold on to the ball, who can be a threat, who can beat a player one versus one. And at just age 14 to put on a show against the centre backs from Charlie Smith, it was great to see," Rademakers said.

Whatever happens after the second round, Rademakers is looking at their long-term development rather than results on the field, believing that they have a foundation established.

"We really see the schoolboy competition as part of the development of the players. It's not that our goals are connected to the results. We want these players to use football to get further in life. The Manning Cup is a great way to do that. We continue to develop the boys and we expect them to have better results in every competition they enter," Rademakers said.