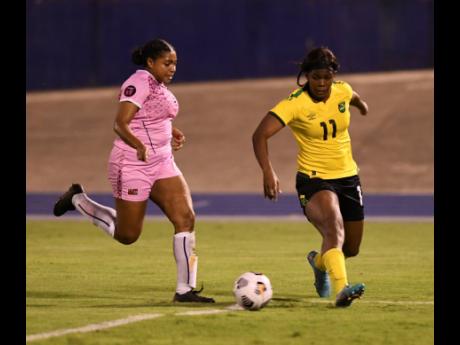 Jamaica's Reggae Girl, Khadija 'Bunny' Shaw, is imposing her will in the English top-flight Women's Super League, which she credits to being more comfortable with Manchester City and a belief in herself.

The near-future focus for Shaw includes next summer's Women's World Cup in New Zealand and Australia, but, in the meantime, she registered her second consecutive brace in the Super League for Manchester City in their 3-0 dispatch of Tottenham Hotspur on Saturday at Brisbane Road.

Shaw's brace takes her to five league goals, leading the early race for the golden boot. Shaw said after the game that her adjustment to the team's playing style, as well as renewed confidence, has given her the freedom to stamp her mark this early in the season.

"I think at the beginning, it was trying to learn the style of the play and know my teammates. It's hard when we have a bad start and with injuries and things like that. Coming into the new season, knowing that I've had that experience from the first, I just believed in myself more and I trust my teammates, so I think that is just the biggest difference," Shaw said.

The match featured Shaw's national teammates Drew Spence and goalkeeper Rebecca Spencer, who failed to stop her. Shaw provided Manchester City with the lead four minutes before halftime. She was on the end of a corner, before doubling the advantage two minutes into the second half with a low strike into the bottom corner. Lauren Hemp added another in the 76th minute as City won back-to-back games for the first time this season.

While not explicitly stating that the golden boot was one of her targets for her sophomore year, she says that it is expected that the responsibility would fall on her to be the goalscoring engine for Manchester City in their quest for the league title.

"The position I play the team looks for me to score goals. I have been working on the training pitch being at the end of crosses and perfecting what I'm good at. I try to take it game by game and going into each game, I try to achieve my objectives and luckily for me today that was one of them.

"We are a fairly young group but it is something that we have been talking about at the beginning of the season. Of course, the first two games didn't end the way we want them to, but we have to take it game by game and look forward and try to get points so we can get to the top of the table. So I think that is what we have been trying to achieve," Shaw said.

Her game comes hours after Jamaica drew France, Brazil and the Group C play-off winners in Group F in next summer's Women's World Cup in Australia and New Zealand.

Shaw turned the focus on the Reggae Girlz and what they can do in their second finals appearance.

"We are just going to do what we have been working on to get us to that point. Just being there is a massive achievement, so we just have to enjoy the moment while we can," Shaw said.