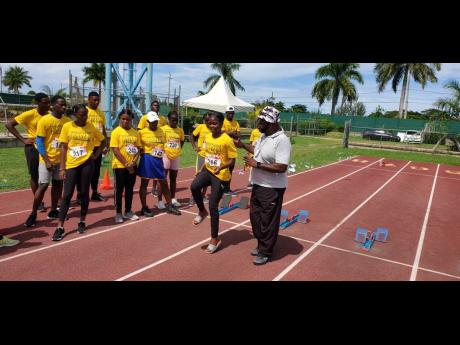 Track and field stakeholders are excited about the impact the return of the MVP Grassroots Athletics Programme will have on the nation, especially in the western region, after the Montego Bay Sports Complex in Catherine Hall hosted the county of Cornwall's leg on Saturday.

The three-part training camps that returned after two years due to the pandemic hosted approximately 120 student-athletes from 30 schools. The event that culminates this weekend with the Surrey leg at the National Stadium in Kingston is sponsored by PUMA, National Commercial Bank (NCB), Wisynco (Powerade and WATA) and Social Development Foundation.

President of MVP Track and Field Club, Bruce James, said they are happy to be back allowing young athletes and coaches to improve their skill and knowledge in the sport, as he looks forward to seeing the results as early as next year.

"We are hoping to see the impact at Boys and Girls' Champs next year and even all the development meets leading into it. What we have done here is to expose over 115 athletes from 30 schools and their coaches to world-class techniques in athletic training across six different areas," James said.

"A lot of the athletes told us they have never hurdled, jump or thrown before so it was amazing to give them that exposure. We believe that it's this exposure that has allowed Jamaica to grow in the throws, jumps and even the middle distance in recent years," he added.

Coach at MVP, Paul Francis, is excited not only for the athletes but more so for the coaches, who will take the knowledge back to their schools, which helps develop the less popular disciplines in Jamaica.

"The kids are so raw (in their technical ability). Over the years we saw improvement that showed even at major championships. I think the participation of both athletes and coaches impacted that, however, due to the pandemic, we are seeing that rawness like when we started in 2013.

"The athletes are showing promise and catching on fast so I have no doubt that these camps will have the same level of impact as before," Francis, who is also the coach of 200 metres World Championships winner Shericka Jackson, said.

"We have the representatives from each school being here, some of who don't have the resources to teach certain disciplines, however, they come to the camp and see how the youngsters respond to certain disciplines and training. It helps with us producing that talent a lot in that discipline - whether it be throws, jumps, hurdles, distance," he added.

Coach of Lacovia High girls, Kamille Ennis, who went to all six technical areas, said she has picked up a few tricks.

"Bring four athletes here to help in correcting some of the finer details of their skills," Ennis said.

"Honesty, I have learned a few things going around to the different technical areas. It will help me going forward. I'll carry these things back home to my programme," she added.