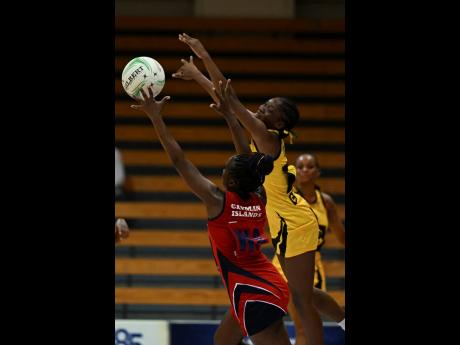 The intensity that Jamaican netballer Crystal Plummer shows on the court is only matched by the demands that she puts on herself to perform at her best, but it is that drive that has national coach Connie Francis encouraged and optimistic about her chances of getting on the final roster for next summer's Netball World Cup in South Africa.

The Sunshine Girls wrapped up their Netball World Cup regional qualifying campaign on Saturday, with Francis' youthful players getting the experience necessary to strengthen their abilities and with next year's tournament in mind.

Plummer was one of the standouts for Francis in wing defence and while at times Francis claims she places intense demands on herself in training, she has managed to make her mark on the Sunshine Girls in a position that Francis believes she can play at next year's tournament, which was evident in last Tuesday's lopsided victory against the Cayman Islands.

"She is keen to learn and that is what I admire about her. I think that at times she is hard on herself but I didn't like how she started that first quarter. I thought that she started a bit sluggish but she got her rhythm and she ignited the fire and she was able to get some good balls, tips, interceptions and things like that," Francis said.

Plummer will get the chance to show more of her talents on the international stage as she is among the players selected for the Fast Five Netball series in New Zealand next month, with opportunities for her and the other young players to prove that they belong on the World Cup roster.

Francis is optimistic about Plummer's future in the sport, believing that those who have made great leaps regardless of age or rank should be in that final World Cup roster and hopes that Plummer continues her rise with the selectors keeping a keen eye.

"She is a young player with great potential. The future looks very bright for her. I'm encouraging her and pushing her to make the final cut because I know that the selectors are looking in and I think that it is really good to reward players who are doing their job," Francis said.