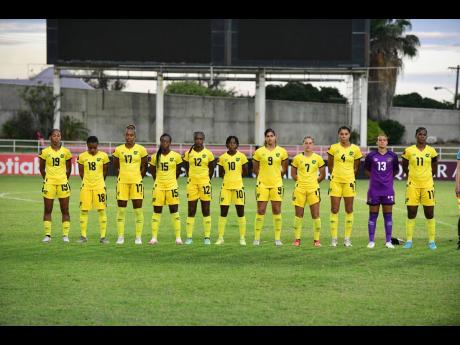 Jamaica's pathway for the Women's World Cup next summer will become clear tomorrow at 1:30 a.m. (Jamaica time) as their first-round opponents will be named at the draw in Auckland, New Zealand.

The Reggae Girlz have been allocated into pot three along with Denmark, Switzerland, the Republic of Ireland, Colombia, Argentina, Vietnam and Costa Rica. Jamaica could face one of the top six teams in the world, excluding reigning champions the United States of America because both are from the same region.

They could, however, face either of the co-hosts New Zealand or Australia, the latter they faced in 2019 where they scored their first Women's World Cup finals goal in a 4-1 defeat.

Former national women's coach Charles Edwards believes the Reggae Girlz can have an ideal pathway by getting a balance zone where everything is up for grabs, although he is adamant that they will have to earn their way to the second round, regardless of opponent.

"I don't think there is such a thing as a best-case scenario because at the end of the day you have to go out there and perform. I think the team has been doing what they need to do. They have been getting good international friendlies. So it augurs well that we should be in good shape and form going to World Cup next year, but what would be ideal is a very balanced zone," Edwards told STAR Sports.

Jamaica were drawn with Australia, Italy and Brazil in their inaugural World Cup campaign in 2019 in France, losing all three games.

Comparing the preparation of their historic campaign to this one, Edwards said that it will play a crucial role in determining Jamaica's qualification for the second round, as he proffered that insufficient preparations led to their first-round exit.

"We really have to look further down the road on how prepared the team will be. The practice games will have a pretty clear idea of our strengths and weakness and how well prepared we are," Edwards said.

Former women's assistant coach Andrew Price believes the level of expectations should be for second-round advancement, with a clear plan of attack for the available international windows before the tournament.

"What we have to do now is to look at the teams that we play now in the available windows, and try and play teams that have like systems or like cultures that we can now at least get a little litmus test to see the type of opponents that we are going to face," Price said.

Jamaica will play Paraguay in a two-game international friendly series on November 10 and 13.