No sweat for Barbados, Jamaica, Trinidad and Tobago 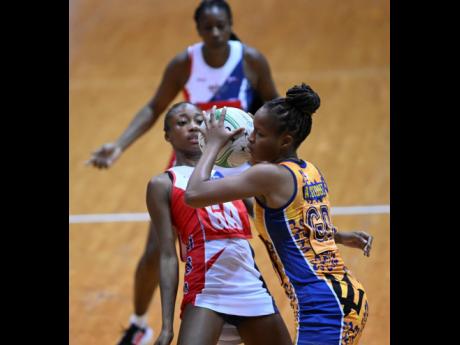 Despite strong resistance, Barbados used a second half surge to ease past the United States 47-26 in their Netball World Cup regional qualifying game last night at the National Indoor Sports Centre.

The Barbados Gems carved out a 10-8 lead in the first quarter but the Americans hit back to take a slim 16-15 lead at halftime. But Barbados came roaring back in the third quarter and this time stretched the lead beyond the reach of the Americans.

St Vincent and the Grenadines bounced back from their narrow 49-42 defeat to Trinidad and Tobago to return to winning ways, defeating St Lucia 49-36. St Vincent led wire to wire although there were some uncomfortable moments in the fourth quarter when St Lucia managed to cut into the lead with timely turnovers. St Vincent are now on four points.

Meanwhile Jamaica defeated the Cayman Islands 81-27 thanks to another strong shooting performance from Gezelle Allison who made 54 of her 59 attempts while Amanda Pickney chipped in with 21 goals from her 27 attempts. In the top-of-the-table clash, Trinidad and Tobago (T&T) defeated Grenada 66-42 with Afeisha Noel scoring 45 goals while Lottysha Cato had 40 for the Spice Girls.

Trinidad are now on eight points and lead the standings outright while Barbados and Grenada are tied on six points. However, Grenada have played a game more than Barbados.

Jamaica, Trinidad, and Grenada both have double sessions today with the latter two teams looking to score wins in their quest to grab the two remaining spots for the Netball World Cup.