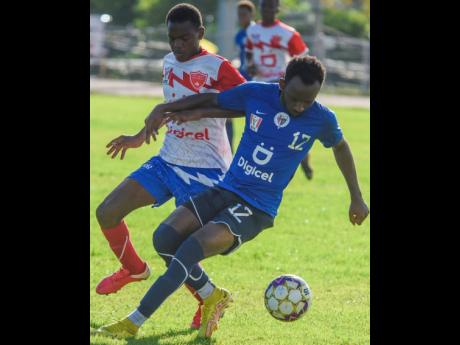 Nicholas Stewart's first season as Holy Trinity High head coach has been more than about building a Manning Cup title contender. For him, it has been about building a culture of accountability but also one of support for youngsters who are in need of support, guidance and leadership off the field for a positive future beyond football.

Stewart, who took over from Devon Anderson in June, has had his growing pains this season, with his team currently sitting fifth in Group B of the ISSA/Digicel Manning Cup with six points, leaving them on the brink of elimination.

The struggles, according to Stewart, are not because of a lack of talent, but a lack of consistency, discipline and a mentor figure with players experiencing personal challenges beyond school and football

"We have to be consistently in these guys. It is not like at Jamaica College where you say training is at 3 p.m. and they turn up. We have to be in these guys. Some of them are not used to certain things. Their lifestyle at home is not necessarily one of the best.

"They are going through a lot of stuff and we have to be a lot of things to them. So going forward we have to know that the school itself, not just the coach, but the school body has to come together to see how we can effect change in the lives of some of these youngsters," Stewart told STAR Sports.

Their 9-0 defeat by JC last Tuesday reflected those difficulties with some starters unavailable because of suspension, forcing Stewart to work with some players who are getting used to the technicalities of the sport. Their first meeting last month was a much closer scoreline despite losing 4-2 but it reflected their limitations and also their potential.

"In the first game (against JC) we scored two and we should have won that game, but it is the indiscipline that has been coming into the team," Stewart said. "I'm just four months into the job so I am just getting used to the culture of the school and the culture of the players."

Stewart's growing pains continued as Holy Trinity lost to struggling St Mary's College 4-2 last Saturday. Holy Trinity face St Jago today at 3 p.m. and he hopes that the groundwork this season will offer better results next year, as he continues to instill a culture that positively shapes the future of his players on and off the field.