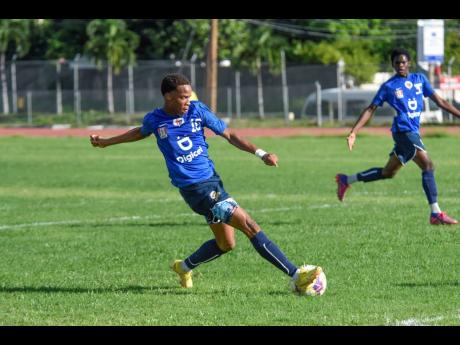 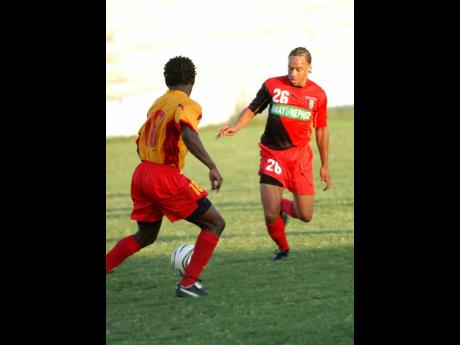 Kevin ‘Pele’ Wilson (right) in action for Arnett Gardens FC during a National Premier League match against Village United in 2005.
1
2

For a young player with football in his family's blood, Jamaica College (JC) midfielder Kevaughn Wilson's motivation for success is more than just living up to the exploits of his Manning Cup winning father but to forge his own path in reaching the same level of success he did.

Wilson spearheaded JC's 9-0 win over Holy Trinity High School yesterday with a first-half hat-trick in the sixth, 32nd and 45th minutes as the Dark Blues extended their winning run to five games.

The 17-year old Wilson is the son of former national player Kevin 'Pele' Wilson who was part of the 1995 Charlie Smith team that had a treble winning season, capturing the Manning Cup Walker Cup and Olivier Shield.

As proud as he is in continuing the legacy set by his father, he is not daunted by past glories or expectations. Wilson is just focused on being the best player he can.

"It's always good to continue the tradition of the family. But I don't feel pressure at all. All I have to do is go out there, keep my head down and let the football talk," Wilson told STAR Sports.

He has been doing that so far this season in his first year at the Manning Cup level but while his goal-scoring talents have been getting attention, his coach Davion Ferguson said that he has shone in other ways, especially against Holy Trinity.

"Wilson without a doubt is a very good talent. His teammates helped him to look good. What was pleasing was the off the ball movement. When he lost the ball he was always counterpressing," Ferguson said.

The impact that Kevaughn's father has had on him has been a strong work ethic, not allowing him any moment of comfort in his performances in unlocking his potential.

"The fans may tell me that I had a good game but he is always demanding more of me. That is a big motivation for me every time that I go on pitch to go hard. He is a big part of it," Wilson said.

But while he is making his own mark the goal for him has never been clearer, winning the Manning Cup just like his father did two decades ago, an achievement that he feels will be special not just for him but for Wilson football legacy.