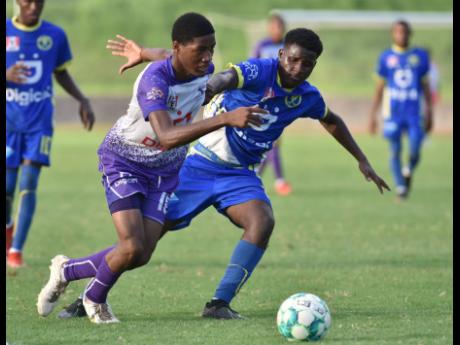 In the case of Waterford head coach, Kevin Reid, anything that could have gone wrong did in their 8-0 defeat to Kingston College in their ISSA/Digicel Manning Cup Group A game at Stadium East.

Nashordo Gibbs netted a second-half hat-trick in the 58th, 65th and 66th minutes while they got tallies from Jaheem Johnson (30th), Ashaine Kennedy (32nd), Dujuan Richards (45th), Tajarie Lee (85th) and Bryan Byam in the 88th.

It was not only that they could not generate any offensive threat in the final third that was troubling, but they also had to see their first-choice goalkeeper Alphanso Salmon and second-string Joshua White leave the field with injuries resulting in outfield player Richard Wasome to take the reigns in goal for the latter part of the game.

Waterford had encountered difficulties with injuries at the goalkeeper position before, with Salmon injured in last week's 3-0 defeat to St George's College and White deputising for him. Reid said that the injuries at the position are unfortunate, but said that his team simply did not do enough against the defending champion.

It's just serious and unfortunate incidents that have been happening to our goalkeepers. I wouldn't say that it has anything to do with our season. It's just unlikely today that we lost both in the game today and we paid for it," Reid told STAR Sports. Coming up against a quality team like that you can't take any chances. You have to come here with your A-Game and we didn't come here with our A-Game."

Waterford remain in third place with 11 points in a season where they are hoping that they can be among the best third-place teams to secure passage to the second round. Even with the majority of his players getting their first taste of Manning Cup football, Reid has not given up the chase, backed by the support of the community which he says has been invaluable.

"The community is behind the team, pushing the team. So I think that alone should really give us what we need to take us through to the next round," Reid said.