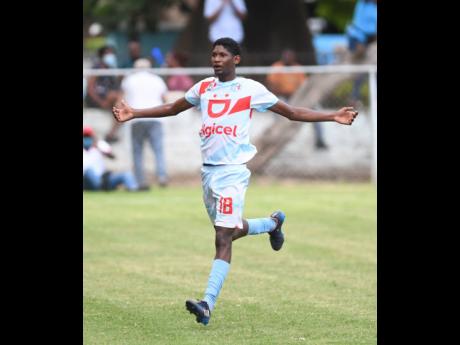 In the aftermath of a 3-0 defeat by St George's College in their return ISSA/Digicel Manning Cup Group A encounter yesterday, Waterford High head coach Kevin Reid was bullish about his team's chances of making it out of the group of death.

Second-half goals from Tae-Sean Oneil in the 57th minute, Brian Burkett, in the 68th, and Adrian Reid, in the 84th powered St George's to victory at Winchester Park.It was sweet revenge for St George's (12 points) who were clipped 3-2 by Waterford when the teams met on September 21.

Waterford managed to hold St George's scoreless at halftime but had to deal with key injuries, first to their starting goalkeeper Alphanso Salmon as well as to other starters at regular intervals throughout the game which made it difficult for them to adjust. But even with the setback, Reid made the guarantee that Waterford would be in the second round thanks to their fighting spirit and their style of play.

"I'm not worried. I can tell you we will be getting out of this group. We will be in the top three getting out of this group. It doesn't matter who we face, we are a team that is very determined and that will fight from start to finish," Reid told STAR Sports. "We train very physically. We are an aggressive team. Any team that faces us they have to come good. To beat Waterford this year you really have to play some good football. You can't make any mistakes because we have attackers who are very technical."

Waterford came into the game riding a four-game unbeaten streak which included that 3-2 signature win over St George's. Yesterday's result saw them slip to third place in Group A with 10 points but Reid said that they are embracing the "us against the world" mentality to spark a shock in a tough group headed by Kingston College with 15 points.

"We love to be the underdogs because people didn't expect us to be where we are right now. We are in the group of death but we have been training for six months now, so our guys are well-conditioned. Mentally they may not be ready because of inexperience but technically they are growing from strength to strength." Reid said. "We have nothing to really worry about. We won the first leg, they won the second leg. We are still in the game and we are still going to fight for it."

"It's not sweet revenge. I think St George's are a good team. We were just unfortunate in the first game. We have quality and we knew that if we put the ball on the ground and pass it around we would have gotten success, which we did," Gayle said.