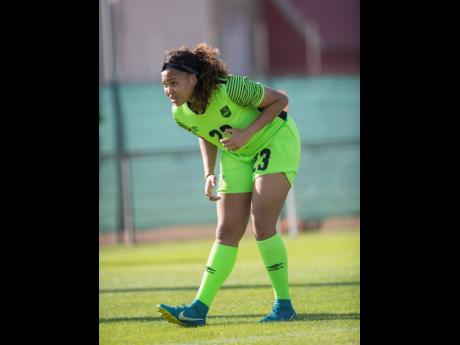 National goalkeeper Yazmeen Jamieson will embark on a new chapter in Europe, specifically in France, after spending the majority of her professional career in Canada.

Jamieson, 24, signed with Division 1 Feminine's GPSO92 Issy for the ongoing season. The club made the announcement on Wednesday ending her chapter with Canadian outfit Simcoe County Rovers.

Jamieson joins Issy, who are looking to get off the mark this year, after starting winless in their first three matches of the season. With a new opportunity in front of her, Jamieson is looking forward to getting acquainted quickly with her new surroundings and making her mark.

"I am super grateful for the opportunity to be here. I am looking forward to playing with these girls. Everyone has been extremely welcoming," Jamieson told the club website.

Her abilities had the backing of her new manager Erwann Bouchard who believes that her international experience will be an asset, with the added benefit of adjusting quickly with fellow national and now new club teammate Deneisha Blackwood.

"Her international career makes her an experienced player and that's a plus for us. Her energy and personality will bring a positive source to the locker room, thus strengthening our cohesion. The presence of another Jamaican international in the group will also help with the integration," Bourchard said.

Jamieson was part of the Reggae Girlz squad that qualified for the Women's World Cup in July, placing third in the Concacaf Women's Championship. During the first round of the qualifiers, she played 45 minutes in their 9-0 win over the Cayman Islands in April.