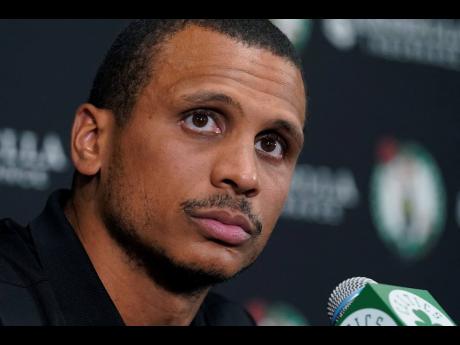 The Celtics were supposed to enter the preseason as one of the favourites to emerge from the Eastern Conference on the heels of their surprise run to the NBA Finals under rookie head coach Ime Udoka.

That was before Udoka was suspended for the upcoming season after a months-long investigation by an external law firm that found multiple violations of team policies for what sources told The Associated Press involved an inappropriate relationship with a woman in the organisation.

The task of holding together the team and capitalising on Boston's championship window has fallen to interim coach Joe Mazzulla, a 34-year-old assistant who was a candidate to land the Utah Jazz's coaching job.

He's had barely 72 hours to balance both learning of Udoka's suspension and being handed a dream opportunity, but Mazzulla said he will take his time giving people time to "feel and heal" as the team prepares to open training camp today.

Mazzulla has been a Celtics assistant for two seasons. As a college player, he led West Virginia to a victory in the 2007 NIT and an upset over ninth-ranked Duke in the next year's NCAA tournament. His only head coaching experience was a two-year stint from 2017-19 at Division II Fairmont State in West Virginia.

He will take charge of a Celtics roster that features only one player, 36-year-old Al Horford, his senior. Free-agent acquisition Danillo Gallinari is the next closest in age -- five weeks younger than Mazzulla.

But what Mazzulla lacks in time on the bench he makes up for in endorsements from a roster full of players who beckoned Brad Stevens to keep his former assistant around following Stevens' promotion to president of basketball operations. Those same players remain adamant that Mazzulla can not only lead this team through difficult circumstances but also guide it back to the NBA Finals and another shot at a championship.

They also acknowledged that their emotions remain all over the place, having learned of the Udoka news on social media before getting basic information from the team that didn't amount to much more than was shared publicly. None of the players who addressed the media Monday had spoken with Udoka since his suspension was announced.

While they understand the privacy constraints that team officials are under, veteran Marcus Smart summed up the past handful of days in five words: "It's been hell for us."

Jaylen Brown said he's trying to remain optimistic as he digests everything.

"I believe in Joe. Joe believes in me. I've had conversations with him. I don't think he sees a limit," he said. "I think he's coming in excited. So I'm optimistic."

Mazzulla said he plans to build on the foundation and culture already established and not try to shake things up too much.